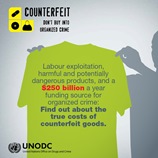 05 June 2014 - To coincide with World Anti-Counterfeiting Day, the United Nations Office on Drugs and Crime (UNODC) has launched a new consumer awareness brochure on the links between counterfeiting and organized crime. Available from www.unodc.org/counterfeit, the brochure complements UNODC's campaign - 'Counterfeit: Don't buy into organized crime' - and has been developed specifically with consumers in mind in a bid to reduce demand for this $250 billion a year concern.

The brochure takes into account the unique position of consumers to encourage change through their choices and behaviour. By highlighting some of the key harms attached to counterfeit goods, the brochure urges this group to be aware of just how risky purchasing these items can be both to themselves and to the wider community. The significant health and safety concerns behind counterfeits are raised, as is the manner in which the illicit trafficking and sale of these goods provides criminals with a significant source of income. Serious issues, such as labour exploitation and environmental damage, are also covered to illustrate just two of the many repercussions of this crime.

"Counterfeiting fuels other crimes such as corruption and money laundering, and often overlaps with  trafficking of drugs, guns and human beings," said UNODC Executive Director Yury Fedotov. "For this reason, there is a pressing need to tackle counterfeiting, particularly by convincing consumers to reduce the demand for these illicit goods."

In recognition of the organization's work on this topic and the international campaign which was launched in January, UNODC is also being presented today with the 2014 Global Anti-Counterfeiting Award. This, the second award to be presented to UNODC, comes as a recognition of the importance of awareness-raising in order to bolster understanding of some of the often overlooked aspects of this crime.

Since its launch, the campaign has enjoyed significant exposure. In particular, the Public Service Announcement, entitled 'Look Behind', has been well received in a number of markets. Spanning the globe and stretching as far as Cambodia in South East Asia and Argentina in South America, the PSA has been broadcast more than 10,000 times on over 30 national and international stations, including on Bloomberg, CNBC, CNN, Deutsche Welle, France 24, National Geographic and Sky.