Commission on Narcotic Drugs opens its 57 th session in Vienna 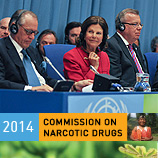 13 March 2014 - Today marks the start of the High-Level segment of the Commission on Narcotic Drugs (CND) 57th session at the UN headquarters in Vienna, Austria, with the participation of delegates representing Member States, the civil society, and other stakeholders. The meetings and events will continue next week (17-21 March) where a number of issues will be discussed. Among these are addressing the use of drugs through a health-based approach, regional efforts to reduce the supply of illegal drugs, the implementation of the international drug control treaties, the challenge posed by  new psychoactive substances, and many others.

Yury Fedotov, Executive Director of UNODC, welcomed dignitaries, experts, policy-makers and all participants to whom he said that, even though we can reflect on the many successes of their joint efforts, we must also do more. "The cultivation, manufacture, trafficking and consumption of illicit drugs continue to pose a major threat to the health of people everywhere; and to the stability and sustainable development of a number of countries and entire regions," he added. This year's meetings and High-Level review by the CND, the main UN body dealing with illicit drugs, are a major milestone on the road to the special session of the General Assembly in 2016 which will address the current state of the world drug problem.

During the opening Queen Sylvia of Sweden, as patron of the Mentor Foundation, urged governments all over the world to reduce the availability of drugs in order to protect children's lives in accordance with their recognised rights, and to remember that "we cannot afford to lose our children". Later, a group of some 40 youth from all over the world expressed their commitment to do their part in addressing the drug problem in an honest and open way, and asked Member States to continue working with them on issues that are crucial to their health and well-being.

Member States recognised the importance of the three main conventions dealing with the use and trafficking of drugs in a Political Declaration and Plan of Action on International Cooperation in 2009. This CND session will review the implementation made so far of both instruments, with the continued aim of applying an integrated and balanced strategy to counter the world drug problem.