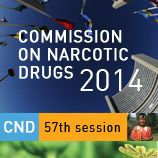 Vienna, 11 March 2014 - The current world situation regarding the use and trafficking of drugs will be addressed at a series of meetings and events starting this Thursday, 13 March 2014, at the United Nations headquarters in Vienna, Austria. Member States will open discussions with the High-Level Review of the 2009 Political Declaration and Plan of Action which will focus on the reduction of both supply and demand of drugs, together with financial and judicial aspects crucial to addressing this issue.

The 2009 Political Declaration strengthened the commitment of Member States to the three international drug control conventions underpinning the international drug control system. Furthermore, a Plan of Action was set forth to reduce or eliminate the impact of illicit drugs, and assess their effects on public health, the rule of law, human rights, armed conflict and other issues. It is estimated that heroin, cocaine and other drugs kill over 200,000 people annually. The High-Level meeting will focus on reviewing the implementation of this Plan of Action across the world, which represents a major milestone in preparations for the UN General Assembly Special Session on the world drug problem in 2016.

The 57 th Session of the Commission on Narcotic Drugs (CND) takes place the following week bringing together delegates representing Member States, inter-governmental organizations, the civil society, and the media to discuss different approaches and develop more effective ways to jointly work on the issues to combat the world drug problem. The opening session is on 13 March at 10:00 at the Vienna International Centre. Throughout the CND, an extensive programme of meetings and side events will take place, including panel discussions on new psychoactive substances, reductions in drug use and trafficking, and others. Notable guests and participants include Queen Silvia of Sweden, UN Deputy Secretary General, Jan Eliasson, the Executive Director of UNAIDS, Michel Sidibe, and many others.

Join the CND conversation on Twitter by using #CND2014 and following @UNODC.