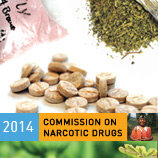 19 March 2014 - The United Kingdom and China have notified the UN Secretary-General and UNODC's Executive Director about the need to add mephedrone and ketamine, two psychoactive substances which until now were not controlled at the international level, to the most restricted category of drugs -known as Schedule I- under the 1971 Convention on Psychotropic Substances. It is expected that these requests will be reviewed by the World Health Organization's Expert Committee on Drug Dependence during their next meeting in June. Both compounds are considered by the international community as new psychoactive substances (NPS).

Through the provisions available in the 1971 Convention Member States have a powerful tool to coordinate their efforts in developing a more robust international drug regime. At the national level, Member States can then establish strategies that address the drug problem in a balanced way, including their effects on public health.

UNODC assists Member States with tools like the NPS Early Warning Advisory, used to identify these psychoactive substances as early as possible, and the Global SMART Programme, which is designed to help Member States manage and analyse ever-increasing amounts of information on illicit synthetic drugs.

At a broader level, by using the established international procedures supported by the UN system and underpinned by the 1961, 1971 and 1988 international drug conventions, Member States can confront the public health and security problems that drugs create in their societies, especially for young people.