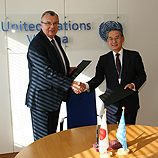 20 March 2014 - UNODC signed today a funding agreement with the Japanese Drug Abuse Prevention Centre (DAPC) that provides grants to NGOs who work in the area of drug prevention.

Speaking at the signing ceremony, UNODC Executive Director Yury Fedotov said, "I would like to express my sincere appreciation for the close to US$5.5 million the DAPC has raised in support of UNODC's work during this time." He added that the need to raise awareness of the drug problem is more urgent than ever and that the UNODC/DAPC partnership shows just how much good work can be done when young people play an active role in these efforts.

During the signing ceremony, Ambassador Toshiro Ozawa, the Permanent Representative of Japan to the International Organizations in Vienna, presented a cheque of around US$190,000 to Mr. Fedotov and signed a new funding agreement with UNODC. Ambassador Ozawa also received a report setting out how UNODC distributed funding to NGOs in 2013.

Since the partnership started, more than 600 grass-root NGOs in some 90 developing countries in Asia, Africa, Eastern Europe and Latin America and the Caribbean have been given funding for their vital work in preventing drug use.

The DAPC is an NGO that organizes annual public campaigns throughout Japan and aims to increase awareness among young Japanese of the dangers of drug abuse. It also raises funds for UNODC to spend in support of NGOs working around the world.