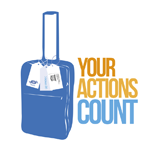 5 March 2014 - UNODC, the World Tourism Organization (UNWTO) and the United Nations Educational, Scientific and Cultural Organization (UNESCO) have joined forces to promote a global campaign urging travellers to support the fight against a number of forms of trafficking. The Campaign was presented to the tourism sector at the International Tourism Bourse (ITB) in Berlin.

'Your Actions Count - Be a Responsible Traveller' aims to raise awareness about the most common illicit goods and services that tourists might be exposed to while travelling. The campaign provides guidance to recognize possible situations of trafficking in persons, wildlife, cultural artefacts, illicit drugs and counterfeit goods, and invites travellers to take action through responsible consumer choices.

"Tourists are global citizens and with over one billion tourists travelling the world each year they must become a force for good. Making the right ethical choice as consumers reduces the demand for illegal products and contributes to preserve natural and cultural assets that form an invaluable part of the heritage of the communities and people we visit." said UNWTO Secretary-General Taleb Rifai during the launch of the campaign.

UNODC Executive Director, Yury Fedotov, meanwhile emphasized the importance of informing travellers about where their money ends up when buying illicit products: "Travellers have a responsibility not to contribute to the profits being generated through organized crime. Whether it relates to the sale of people, animal products, drugs, cultural artefacts or counterfeit goods, it is important that travellers fully understand the exploitative nature of these activities. Awareness campaigns such as this one are critical if potential consumers are to be informed about the adverse effects of their purchasing decisions."

UNESCO Director-General Irina Bokova stressed that protecting cultural heritage is inseparable from protecting people. "Tourists are easy targets for dealers selling cultural artifacts of doubtful provenance," Ms Bokova said. "They are usually unaware that these 'souvenirs' may be stolen heritage - ripped away from their original settings, illegally excavated from archeological sites, or traded by unscrupulous individuals offering meagre payment. Their loss can inflict great damage and sorrow on their rightful owners, for whom such items are an intrinsic part of their cultural identities and values."

'Your Actions Count - Be a Responsible Traveller' will contribute to the UN's goal of combating organized crime as well as upholding the UNWTO Global Code of Ethics for Tourism.

The campaign launches with the support of Marriott International and Sabre Holdings, the first tourism companies to partner in the campaign, promoting this important message among their millions of customers. Marriott will share the anti-trafficking message with their guests, employees and Marriott Reward Members through their internal and external websites and news bulletins, reservation confirmation emails, Marriott Rewards member newsletters and blog and social media. Sabre will support the campaign with four consumer-facing businesses and/or products - Travelocity, lastminute.com, TripCase and GetThere - as well communicating externally to their stakeholders and internally to their employees.

Aside from the heads of the three UN organizations, participating at the launch were the newly-appointed chairperson of the World Committee on Tourism Ethics and former Executive Director of the World Trade Organization, Pascal Lamy, the Executive Vice President and Chief Global Communications and Public Affairs Officer of Marriott International, Kathleen Matthews, and the President and Managing Director of Sabre Hospitality Solutions, Alex Alt.

Pascal Lamy gave his full support to the initiative: "In the light of the ever-growing number of international tourists, we need to promote a more ethical and responsible behavior among travellers.  I have therefore made it a priority for the Committee to support this UN-led awareness campaign, informing tourists how they can join the global fight against trafficking", he said. "A central focus of the Committee will be reaching out to young people, spreading the anti-trafficking message to future generations of travellers".

"We know that our industry can play an important role in helping to stop trafficking by delivering this campaign message to the traveling public. Marriott will share it with more than 80 million customers and our workforce of approximately 325,000 worldwide. We invite other travel leaders to join us and the United Nations agencies in this critical effort, " said Kathleen Matthews.

Bruce Charendoff, Senior Vice President, Government & External Affairs of Sabre said:"Fighting human trafficking is Sabre's top social responsibility initiative, and we therefore jumped at the opportunity to partner with the United Nations to raise awareness of this widespread crime among the millions of travellers we serve around the world.  We will broadly share the "Responsible Traveller" campaign message on our Travelocity and lastminute.com online booking tools and our TripCase mobile app, as well as through our GetThere corporate booking solution for companies that choose to participate.  Traffickers commonly use unwitting travel industry participants in their activities.  By working together, we can educate travellers and industry players, and begin to eradicate this vicious crime. We can also give hope to its victims."

Campaign site: Your Actions Count - Be a Responsible Traveller