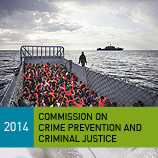 15 May 2014 - In the wake of the tragic migrant boat capsizings in the central Mediterranean -the most recent one off the Italian island of Lampedusa on 12 May 2014, where scores of migrants drowned and hundreds more were rescued in that country's waters- the spotlight has been put on the oftentimes deadly journey smuggled migrants undertake while looking for a better future. During this year's session of the UN Commission on Crime Prevention and Criminal Justice (CCPCJ), Member States discussed better ways to cooperate against migrant smuggling and pursue the criminals that exploit their plight.

Although not all journeys are fatal, migrants -whether asylum seekers, refugees, children, trafficking victims, or other migrants- are often victims of criminal organizations that benefit from their vulnerability, and who might extort, abuse and exploit them.

To strengthen the international resolve to address the smuggling of migrants, Member States have presented at the CCPCJ this week, for consideration, a resolution on the international cooperation and criminal justice responses to prevent and counter this crime.

The new resolution will address the importance of cooperation among countries; data collection and information sharing; the reinforcement of Member States capacities to fight this crime and adopt appropriate legislation; and effective coordination between agencies that deal with smuggling of migrants, among other issues.

UNODC works with governments and other partners not only to prevent this crime, but to find better ways to protect the life and safety of smuggled migrants, one of the objectives of the UN Protocol against the Smuggling of Migrants, which has been ratified by 138 countries and forms the basis of international action in this area. To assist and guide Member States in the appropriate implementation of the Protocol, UNODC has developed practical guidelines, such as a model law against migrant smuggling, training manuals, and assessment and implementation guides to combat this crime.

After the latest Lampedusa tragedy, Yury Fedotov, Executive Director of UNODC, stated that, in order to stop migrant smuggling, the international community needs to take firm action. As a first step, he added, "countries can ratify the migrant smuggling Protocol. But more is needed. Countries can use the Protocol to develop international action against the smuggling of migrants by promoting cross-border cooperation, exchanges of information and joint operations to break-up the criminal networks."