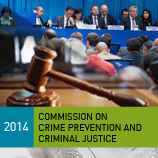 16 May 2014  - The abduction of Nigerian schoolgirls and migrant deaths off the island of Lampedusa highlight the serious threats faced by the international community, said the Executive Director of the UN Office on Drugs and Crime (UNODC), Yury Fedotov, speaking in Vienna.

Mr. Fedotov's remarks came at the closing of the 23rd Session of the Commission on Crime Prevention and Criminal Justice (Crime Commission) and were delivered before an audience of representatives from Member States, UN bodies, intergovernmental organizations, and civil society.

The threats of drugs and crime, he said, place a heavy responsibility on the Crime Commission as the principal policymaking body of the United Nations. He noted that the Crime Commission's work was helping to strengthen the crucial efforts being undertaken in the field against crime.

On the Nigerian kidnappings, Mr. Fedotov said, "I condemn in no uncertain terms the violent abduction of the schoolgirls in Chibok, and I know we all stand in solidarity with the families, and the people and government of Nigeria,"

He also offered UNODC's full support for the efforts of the UN Secretary-General's High-Level Representative, Said Djinnit, to provide integrated UN assistance during the ongoing crisis.

Mr. Fedotov praised the resolutions and discussions that had taken place and said "[The Crime Commission's] work has… helped to put the spotlight on urgent threats such as wildlife and forest crime, and the importance of the rule of law and combating drugs and crime to promote sustainable development."

He also noted it was vital to advance global action on these issues as the UN moved towards the 13th Crime Congress in Qatar next April, and the September 2015 UN summit on the post-2015 development agenda.

During the Crime Commission a number of resolutions were passed, including on the elimination of violence against children in the field of crime prevention and criminal justice, and treatment of prisoners.