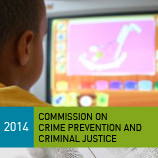 16  May 2014 - At a side event during the Crime Commission this week, UNODC launched a study on the effects of new technologies on the abuse and exploitation of children. The event brought together experts from the fields of law enforcement and academia to present the study and discuss this issue of growing international concern.

Fast-paced technological innovation and widespread accessibility of information and communication technology (ICTs) have transformed societies around the world. Children in particular have unprecedented access to computers and mobile technologies, and have in recent decades tended to adopt these from an early age, resulting in ICTs becoming thoroughly embedded in their lives. Although the exploitation of children is not a new phenomenon, the digital age has exacerbated the problem and created more vulnerability to children.

The UNODC study is based on open source research on the issue and the outcomes of an informal expert group meeting held in Vienna in September 2013. It covers the main forms of ICT-facilitated child abuse and exploitation, including the creation and distribution of child sexual abuse material (child pornography); commercial sexual exploitation of children; cyber-enticement, solicitation and grooming; cyber-bullying, cyber-harassment and cyber-stalking; as well as exposure to harmful content.

"Cyberspace is a place where children can be groomed with impunity, while the perpetrators remain hidden. By launching this study, UNODC and its partners are helping to bring online child abusers out of the shadows and into the judicial spotlight through better training and better investigative techniques among law enforcement officers" said UNODC Executive Director Yury Fedotov.

The study found that low prices for information and communication technology (ICT) devices and widely available high-speed internet leads to sex offenders having unprecedented access to materials and an online community to facilitate their abusive and exploitative behavior. Through the internet, online predators gain access to children faster and in higher volumes, using chat rooms, emails, online games and social networking sites to find and groom victims.

The study also found that one of the greatest gaps in fighting online child abuse is the lack of skilled and dedicated personnel among law enforcement agencies in key investigative areas, such as handling digital evidence and conducting image analysis, profiling offenders, and the ability to develop networks to facilitate cooperation across jurisdictions and borders, among others.

Victim assistance is also an area where deficiencies were found, such as the absence of standard protocols for supporting victims through the investigative process, as well as appropriate techniques for interviewing young victims and collecting and preserving victim-related evidence.

The study noted that the private sector is also a key actor in the prevention of such crimes, as the main driving force among technological development worldwide. Self-regulation by internet service providers, self-monitoring by travel and tourism companies and the creation of financial and technology coalitions or coordination groups are some of suggested areas for improvement.

Preventive efforts are also key. Parents, guardians, child educators and civil society are a vital component in combating the problem, including by supporting children in understanding and handling online risks, "flagging" abusive and exploitative material online, and through the creation of telephone hotlines for reporting such crimes.

The UNODC study is accompanied by a proposed package of technical assistance for Member States to help combat this crime, which includes law enforcement and judicial training, activities for improved international cooperation and awareness raising tools.

Study facilitating the identification, description and evaluation of the effects of new information technologies on the abuse and exploitation of children