From the crime scene to the courtroom: ICCWC release Guidelines on ivory 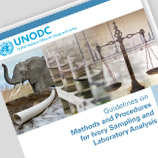 13 November 2014 - Elephant poaching remains at critical levels in Africa, and continues to exceed the natural elephant population growth rates. This rapidly growing transnational organized crime threatens national security, the rule of law, and economic and social development. The International Consortium on Combating Wildlife Crime (ICCWC) today released ' Guidelines on methods and procedures for ivory sampling and laboratory analysis' in support of the deployment of forensic technology to combat elephant poaching. Led by UNODC, as a member of ICCWC, the Guidelines were developed together with experts from around the world.

"We believe that the use of the Guidelines will support more timely, thorough and effective investigations, resulting in an increased number of successful prosecutions and a reduction in this illegal trade" said UNODC's Executive Director Yury Fedotov.

Intended for worldwide use, the Guidelines are aimed at first responders, investigators, law enforcement officials, forensic scientists, prosecutors and the judiciary. Their purpose is to facilitate the use of forensic science to the fullest extent possible in order to combat wildlife crime, and in particular, to combat the trade in illegal ivory through the provision of guidance to support transnational criminal investigations and law enforcement operations.

The Convention on International Trade in Endangered Species of Wild Fauna and Flora (CITES) Secretary-General John E. Scanlon stated that "it is vital that law enforcement authorities deploy all tools available to them to help combat wildlife crime. The Guidelines will help increase the use of forensic technology, a crucial tool in the fight against wildlife crime, to determine the origin of seized wildlife specimens, and support the identification and arrest of suspects".

"Fully in line with the commitment of the Customs community to combat the illegal trade in wildlife, these guidelines provide law enforcement agencies with first-class technical information for advancing investigations and prosecutions, which will in turn positively impact deterrence, " said WCO Secretary General Kunio Mikuriya.

Political momentum for urgent action has been building. In 2013, the 16 th CITES Conference of the Parties adopted measures to encourage the increased use of forensic technology to fight wildlife crime. Last year, at the African Elephant Summit held in Gaborone, Botswana, governments pledged to tackle the illegal ivory chain and called for the development of a network of forensic labs. The guidelines will support these actions.

Davyth Stewart, Criminal Intelligence Officer with INTERPOL's Environmental Security Unit, explained that "these guidelines cover the whole chain of custody, from supporting law enforcement officers on the ground with collecting samples for forensic analysis and crime scene management, to laboratory analysis, interpretation of results and data handling. This is crucial for building the evidence base to prevent and combat ivory trafficking and a step forward in advancing law enforcement actions against illegal elephant poaching".

Under the umbrella of ICCWC, the CITES Secretariat, INTERPOL, UNODC, the World Bank and the World Customs Organization (WCO) are working together to bring coordinated support to wildlife law enforcement agencies and networks at national, regional and global levels to enhance global cooperation and capacity to combat wildlife and forest crimes.

Guidelines on methods and procedures for ivory sampling and laboratory analysis