UNODC partners with the Supreme Court of Panama to promote justice 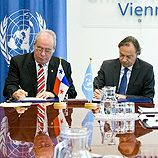 5 November 2014 - UNODC is supporting Panama in the transition of its judiciary to an adversarial system to speed up criminal procedures and give wider access to justice to the population in the country. Through a U$ 40 million project fully funded by Panama, UNODC will assist the country in aligning its existing structures to the new system, and in reorganizing and redeploying personnel to fulfil new roles.

The adversarial system is a legal system where two advocates represent their parties' position before an impartial person or group of people, usually a jury or judge, who attempt to determine the truth of the case. In Panama, the application of the new system will allow for a speedier and more transparent resolution of conflict between parties.

"This system works better to protect both the defendant and the victim's individual rights" explained the President of the Supreme Court of Panama José Ayú Prado Canals, who visited Vienna last week to sign the project at UNODC. "The oral accusatory system defends the rights of both accused and victims, and because its application is faster, it will effectively help strengthen the rule of law in our country and help protect our democracy."

Through the project, UNODC will support the government of Panama in adapting structures and procedures to the new system, as well as in upgrading the skills of staff to bring them in line with the requirements of an oral, public and adversarial procedure. It will also support awareness raising amongst citizens about the added value of the new system and help build and adapt offices and courts.

"UNODC has experience in helping countries to transition to the accusatory system, and we offer our full support to Panama in this - from the building of infrastructure to strengthening capacities - but also in addressing cross-cutting themes such as corruption and access to justice among women, indigenous peoples and other vulnerable populations", said UNODC Deputy- Executive Director Aldo Lale-Demoz. "We also hope that our partnership with Panama on this project could become a model for other countries in the future."