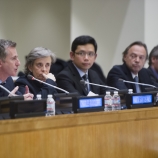 25 November 2014 - Children have the right to be protected from violence, abuse and exploitation. Twenty-five years after the adoption of the Convention on the Rights of the Child, however, many children still lack the opportunity to grow up in a peaceful and non-violent environment in which their rights to survival, development and well-being are fully respected. Despite considerable progress by a number of Member States in addressing violence against children through crime prevention and judicial measures, challenges remain in protecting children from violence when in contact with the justice system.

The UN General Assembly's Third Committee recently approved a new normative instrument, United Nations Model Strategies and Practical Measures on the Elimination of Violence against Children in the Field of Crime Prevention and Criminal Justice". UNODC, together with the Governments of Austria and Thailand, UNICEF, the Office of the High Commissioner for Human Rights, and the Special Representative of the Secretary-General on Violence against Children, Marta Santos Pais, last week organized a High Level Panel Discussion on the margins of the 69 th session of the General Assembly in New York to present the Model Strategies.

'Preventing violence against children in justice systems forms a key component of UNODC's work in the area of Justice for Children,' said Aldo Lale-Demoz, UNODC Deputy Executive Director. Mr. Lale-Demoz also unveiled the joint UNODC-UNICEF Global Programme on Violence against Children, a key instrument to assist Member States in the effective implementation of the Model Strategies. 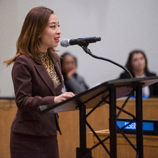 The event was attended by representatives of Member States, UN entities and civil society organisations. Key note speeches were delivered by Princess Bajrakitiyabha Mahidol of Thailand and Sophie Karmasin, Austrian Minister for Families and Youth. The Governments of Austria and Thailand were the key political driving forces behind the development and approval of the Model Strategies.

Princess Bajrakitiyabha Mahidol reiterated the commitment of Thailand in promoting the rights of children in contact with the justice system and referred to the first capacity building initiative aimed to promote the "Model Strategies" which was jointly conducted by UNODC, UNICEF and the Thailand Institute of Justice in Bangkok, from 3 to 5 November 2014 targeting 150 criminal justice practitioners from 16 Asian countries.

Ms. Karmasin hailed this new initiative and its new standards and norms that will help countries develop better responses to violence against children, while, for her part Ms. Santos Pais, who played an instrumental role in the development and adoption of the Model Strategies, stressed the need for enhanced cooperation amongst all stakeholders regarding violence against children in an effective manner.

UNODC and Justice for Children

Webcast of the High Level Panel Discussion on the Model Strategies