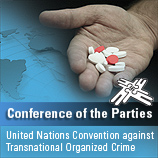 13 October 2014 - One of the most harmful forms of counterfeit goods is fraudulent medicines. In recent years there has been a marked increase in the manufacturing, trade and consumption of these products - often with harmful results, and at times fatal. At a side event during the Seventh Session of the Conference of the Parties to the UN Convention on Transnational Organized Crime (UNTOC) last week, experts discussed the legal tools available to Member States to fight and prosecute criminal trading in medicines.

During the event, a case known as Operation Singapore was analysed as it involved the import of counterfeit medicines into the United Kingdom's legitimate supply chain. When defective medicines and packaging were reported, an investigation was conducted involving 12 countries, and led to the discovery of a vast network of criminals trafficking in fraudulent medicines and laundering the proceeds.

Operation Singapore showcased how Member States apply the Convention in countering trafficking in fraudulent medicines. Applying several provisions found in the Convention, the head of the criminal group was prosecuted for conspiracy, and money laundering. His punishment included eight years of imprisonment and the confiscation of millions of pounds sterling. Other provisions of the Convention used in this case include mutual legal assistance for gathering international evidence and extraditing defendants.

The UN organized crime convention forms the legal basis for international cooperation against serious crimes and so far counts 182 Member States as parties, approaching universal ratification. The biennial Conference of the Parties advances the implementation of the Convention and its three protocols - on human trafficking, smuggling of migrants and firearms - to support anti-crime activities.