Poaching of rhinos in the spotlight at organized crime conference 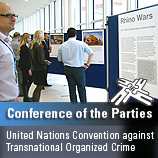 9 October 2014 - Each year, countless species are driven closer to extinction while criminals make billions of dollars from the sale of protected wildlife. At the bloody heart of this conflict is the rhino's horn, a prized ingredient in traditional Asian medicines. After years of being killed for their horns, the wild rhino population in Africa now numbers only about 25,000. During this week's Seventh Session of the Conference of the Parties to the UN Convention on Transnational Organized Crime, UNODC drew attention to this issue with an exhibition of award-winning photographs highlighting the devastating impact of wildlife crime. 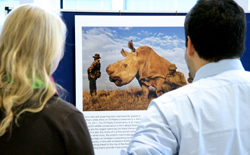 The exhibition, prepared by UNODC with the generous support of Getty Images, is based on the reportage "Rhino Wars" featuring images taken in South Africa by award-winning photographer Brent Stirton and text by Peter Gwin. "Rhino Wars" was published in National Geographic in March 2012 and won the World Press Photo first prize for Nature stories, and the Overseas Press Club's Whitman Bassow Award for international environmental coverage. 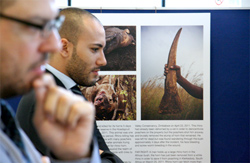 UNODC's Global Programme for Combating Wildlife and Forest Crime delivers assistance on a regional and national basis to support law-enforcement responses against the criminal poaching of protected species. The Programme helps countries put in place appropriate legislation and strengthen investigative, prosecutorial and judicial capacities to fight this crime. It also promotes the collection and analysis of relevant data, and raises awareness about the negative impact of this crime in order to reduce the global demand for illicit wild fauna and flora.