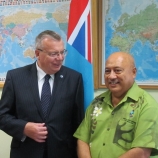 22 October 2014 -The Executive Director of the UN Office on Drugs and Crime (UNODC), Yury Fedotov, today met with Fiji's President Epeli Nailatikau to discuss cooperation against drugs, crime, corruption and terrorism in the Pacific region. He is the highest ranking UN official to meet the President since the general election held on 17 September 2014.

"I offer my warmest congratulations to the President for the assent of Fiji's constitution. The new constitution can help the country make bold advances in terms of transparency, good governance and parliamentary government, which are all essential in the fight against drugs, crime, corruption and terrorism, " said Mr. Fedotov.

The UNODC Chief reiterated his commitment to Fiji and the wider Pacific and said these welcome developments offered fresh impetus for closer ties between the country and UNODC. He also said UNODC's Regional Programme for Southeast Asia and the Pacific would continue to offer its full support to Pacific Island countries, including Fiji, in the areas of anti-corruption reform and crime and terrorism responses.

"The regional programme's work is critical", said Mr. Fedotov. "The Pacific has a vulnerability to transnational organized crime that can only be solved through enhanced regional cooperation and with the international community's assistance."

UNODC participates in the Pacific Islands Forum Secretariat (PIFS) Regional Security Committee, which addresses the issue of regional policy on transnational organized crime. In 2015, UNODC will also extend its regional focus to anti-money laundering activities as well as undertaking a detailed transnational organized crime threat assessment across the Pacific designed to support its projects and programmes.

Mr. Fedotov met President Nailatikau during a two-day visit to the country, as part of a wider mission to the Republic of Korea, Australia and New Zealand. He also met with Fiji's Attorney General and Minister for Justice and Finance Aiyaz Sayed-Khaiyum, Minister of Foreign Affairs Inoke Kubuabola, and the Secretary General (Acting) of PIFS Andie Fong Toy.