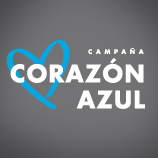 25 September 2014 - Peru is the latest country to join the Blue Heart Campaign against Human Trafficking. During the announcement, the Peruvian Minister for Women and Vulnerable Populations Carmen Omonte said her country would create three specialized Prosecutor offices to deal with this crime.

According to the Attorney General's office, more than 1,500 human trafficking cases were filed with the Peruvian authorities from 2007 to 2013. Teens between 13-17 are the most vulnerable, making 55 per cent of reported cases. Women represent 85 per cent of the victims, with 54 per cent lured by false job offers. According to the Prosecutor's office, half of these cases were for sexual exploitation.

The Blue Heart Campaign, adopted by 12 countries, seeks to encourage involvement and inspire action to combat human trafficking. At the launch in Peru, UNODC Representative Flavio Mirella said that the Blue Heart symbol allows "each of us to be a voice for those who lack their own voice by being victims of human trafficking".

The event, held on 18 September, was chaired by the Minister of Interior Daniel Urresti and attended by representatives of the national human trafficking task force, such as the Ministry of Justice and Human Rights, the Prosecutor's office, the Attorney General's office, and civil society organizations. It featured a host of activities, such as a special "blue corridor" at a marathon race and the screening and discussion of a documentary in order to engage with the community on the importance of combating this scourge.

Human trafficking is a global problem and one of the world's most shameful crimes, affecting the lives of millions of people around the world and robbing them of their dignity. The Blue Heart Campaign against Human Trafficking works to raise awareness of the plight of victims and to build political support to fight the criminals behind trafficking.

UNODC Office in Peru and Ecuador