Recovery of stolen assets makes progress but more needs to be done, according to latest report 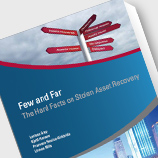 11 September 2014 - A new joint report from the Stolen Asset Recovery Initiative (StAR) and the Organisation for Economic Cooperation and Development (OECD) shows a significant increase in the freezing of stolen assets, along with some improvements in amounts of assets returned. The report highlights, however, that this is still a small share of what is estimated to have been illegally taken.

The report, 'Few and Far: The Hard Facts on Stolen Asset Recovery', analyses fresh data from OECD countries for the period 2010-2012, comparing progress and achievements with that of the first StAR/OECD report (2006-2009) and sets out what needs to be done to step up the recovery of assets.

According to the report, OECD members increased the total assets frozen in the period 2010-2012 from US$1.225 billion to US$1.398 billion. Additional findings also showed that more assets were returned to developing countries; that countries were more successful in freezing and returning stolen assets through innovative legal avenues and powers; and that countries with established asset recovery policies and solid legal and institutional frameworks, such as Switzerland, the US and the UK, achieved greater success in returning the proceeds of corruption. These latter successes provide useful experience and practices for others to follow.

A huge gap remains, however, between the results achieved and the billions of dollars estimated stolen from developing countries each year. Between 2006 and mid-2012, OECD members returned US$423.5 million, compared to the estimated US$20-40 billion stolen each year.

The report's recommendations include more high-level commitment to asset recovery; taking action to identify and freeze allegedly stolen assets while also establishing incentives for domestic practitioners to initiate cases; ensuring that a wide range of asset recovery tools are available and used; and promoting the role of development agencies and involve them in asset recovery.

The Stolen Asset Recovery Initiative (StAR), a joint effort from UNODC and The World Bank Group, works with developing countries and financial centers to prevent the laundering of the proceeds of corruption and to facilitate more systematic and timely return of stolen assets. The initiative has found itself increasingly in demand globally, trying to satisfy the need for its expertise, training and advice in sub-Saharan Africa, Latin America, East Asia and elsewhere. In addition, StAR has worked with several countries, helping them - upon their request - to develop legislation to strengthen legal frameworks to support asset recovery. Countries can request StAR assistance by sending a written request to the StAR Secretariat Coordinator, the Chief of the UNODC's Corruption and Economic Crime Branch and the UNODC Country Representative, or the World Bank Country Director.