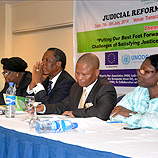 23 April 2015 - Nigeria is working towards a more transparent and merit-based judicial appointment system, with the approval in late-2014 of the country's revised guidelines for the appointment of judicial officers. Revisions to the guidelines followed a conference organized by UNODC under a multi-year European Union-funded project to reform the justice sector in Nigeria.

In July 2014, UNODC, in collaboration with the National Judicial Council, the Nigerian Bar Association, Access to Justice, and the Open Society Initiative for West Africa, organized a Judicial Reforms Conference under the theme 'Putting Our Best Foot Forward: The Judiciary and the Challenge of Satisfying Justice Needs of the 21st Century'. The Conference, which was attended by top national and international judicial experts, including the Chief Justice of the Constitutional Court of South Africa and the former Chief Justice of Nigeria, extensively reviewed the appointment, performance evaluation, and discipline of judicial officers at both the federal and state levels.

A major outcome of the Conference was the revision of the previous guidelines for the appointment of judicial officers, which were perceived to be weak, non-transparent and vulnerable to abuse by political office holders and not in line with international best practices.

"The revised guidelines will support the fight against corruption in the judiciary. It represents significant improvements with more clearly established appointment and disciplinary processes that will enhance ethical conduct by judicial officers and restore confidence in the administration of justice in Nigeria," said former Chief Justice of Nigeria, Mariam Aloma-Mukhtar.

The Executive Director of the non-governmental organization Access to Justice, Joseph Otteh, meanwhile said: "Judicial appointments are a gateway to the exercise of enormous judicial powers and authority. Where procedures of appointments are weak, flawed or vulnerable, the outcomes of the process will likely reproduce those frailties and flaws. The new guidelines will contribute to making Nigeria's judiciary stronger and more respectable, and strengthen its role as the defender of constitutional democracy."

Careful, consistent and unbiased implementation of the new guidelines will contribute to improving good governance and compliance with the rule of law in Nigeria and help improve access to justice especially for the under-privileged Nigerians who are often left out in justice administration.

'Support to the Justice Sector in Nigeria' is a 42-month, €26 million project funded by the European Union and implemented by UNODC to improve the effectiveness, accessibility, accountability, transparency, and fairness of the justice system in Nigeria. The project is being implemented at the federal level as well as in nine states (Anambra, Bayelsa, Benue, Cross River, Imo, Katsina, Lagos, Osun, and Yobe) and the Federal Capital Territory to support key initiatives of the Federal Ministry of Justice to drive a coordinated, unified and integrated reform across the justice sector.