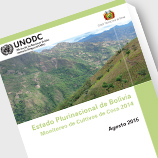 At the Survey's launch, UNODC Representative in Bolivia, Antonino De Leo, praised the Bolivian Government's efforts for the continued reduction of the coca crop area during the last four years. Mr. De Leo highlighted that, between 2010 and 2014, "the surface under coca cultivation declined by 10,600 ha, which represents a reduction of more than a third."

Through the use of satellite imaging and field monitoring, reductions in the two main areas of cultivation were detected. The regions of Los Yungas de La Paz and Trópico de Cochabamba together constitute 99 per cent of the areas under coca cultivation in the country. Between 2013 and 2014, these two areas reduced their surface under coca cultivation by 10 per cent and 14 per cent respectively, from 15,700 to 14,200 ha and from 7,100 to 6,100 ha. In the Norte de La Paz provinces the cultivation area decreased from 230 to 130 ha. 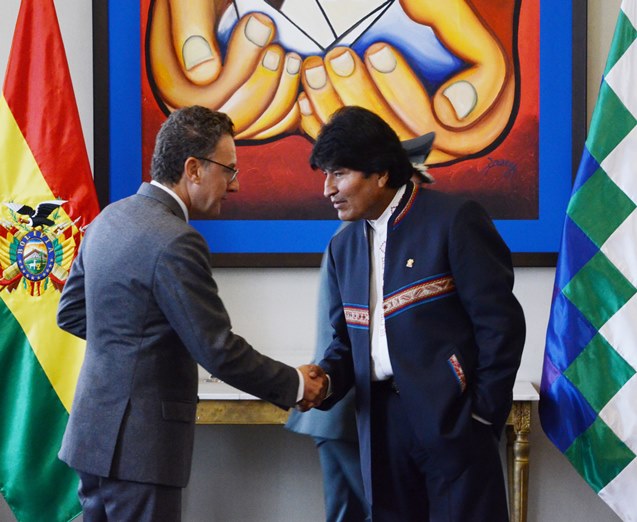 There are 22 protected areas in Bolivia - accounting for 16 per cent of the country's surface - where coca crops are forbidden by Bolivian law. In 2014, there were 214 ha of coca crops detected within six protected areas, of which 59 per cent were in Carrasco National Park.

In February 2013, Bolivia re-acceded to the 1961 Single Convention on Narcotic Drugs with a reservation on coca leaf. This reservation allows the chewing, consumption and use of the coca leaf in its natural state for cultural and medicinal purposes, as well as its growth, trade and possession to the extent necessary for these licit purposes. The current national legislation, which dates back to 1988, states that the area under coca cultivation must not exceed 12,000 ha. In the last years, the Bolivian government delineated the zones where coca crops are allowed within the three coca cultivation areas of the country: the Yungas de La Paz, Trópico de Cochabamba and Norte de La Paz provinces.

Speaking to the press, Mr. De Leo highlighted the country's policy of dialogue, participation of coca growing unions and respect for human rights. Additionally, he reminded the audience of "the importance of comprehensive, participative and long-term development programmes, as essential elements to ensure a sustained reduction of illicit crops."

2014 Coca Survey in the Plurinational State of Bolivia (in Spanish)