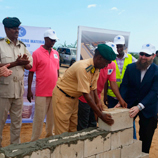 22 December 2015 - In recent days, a ground breaking ceremony was held at the site of the Mogadishu Prison and Court Complex (MPCC) in the Somali capital. This is a significant step towards providing the Somali justice system with the infrastructure and resources to conduct trials in a safe and secure environment for both prisoners and judicial staff. When completed, the MPCC will also allow for justice to be administered in Mogadishu to high-risk detainees. Moreover, the facility will include a 1,000 bed prison that meets international standards and is human rights compliant.

In partnership with the UN Office for Project Services (UNOPS), the MPCC project is being undertaken in three phases. UNOPS have produced designs for the facility, and provided tendering and construction oversight on behalf of UNODC. Having a substantial project cost, this is perhaps the largest infrastructure development project ever undertaken in the country, and follows on from UNODC's success in the rehabilitation of Hargeisa Prison and the opening of a new 500-bed prison in Garowe in April 2014.

The construction of the MPCC falls under UNODC's Global Maritime Crime Programme (GMCP), which was launched in 2009 to support the trials of piracy suspects in Eastern Africa. As the programme expanded, it became necessary to branch out into prison development and mentoring in order to provide humane detention facilities for pirates convicted in third-party countries and transferred to Somalia to serve sentences in their home country. This effort is part of the Piracy Prosecution Model, developed by the GMCP.

In this regard, the Mogadishu Complex will be the most advanced and secure facility in the region. It is specifically designed to cater to Somalia's need to hold a significant medium to high risk prisoner population near a civilian, secure court to reduce the need for prisoner transportation through the city which exposes both prisoners and custodial corps staff to risks of attack. The facility also needed secure accommodation for judicial staff as these have been subject to targeted attacks in the city.

A comprehensive training programme for judges, prosecutors, and court officials will also run in parallel to the construction project. This will include training in the conduct of serious criminal cases. Training will additionally be provided to corrections officers in basic security operations and human rights, as well as subjects such as 'Dynamic Security' and 'Countering Violent Extremism'.