UNODC in the Kyrgyz Republic: Bringing the police closer to the people 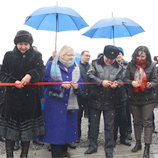 19 February 2015 - Community ties between the police and locals in the Kyrgyz Republic moved a step closer this past month with the opening of a new police station in the city of Jalal-Abad. Marking the culmination of a two-year project between UNODC and the Kyrgyz Ministry of Internal Affairs, the construction of the police station is part of efforts aimed at strengthening cooperation between law enforcement and local communities on crime prevention and public safety.

Situated in a densely populated residential area servicing around 30,000 people, the new building features modern facilities with offices for both neighbourhood police officers and juvenile inspectors. With a focus on community development, a new sports hall for youth in the neighbourhood - paid for by the local government and the police - has also been established in close proximity, while plans for the creation of a new playground for children in the area are also being discussed.

As part of UNODC's wider work in assisting with law enforcement efforts, the organization also trained 21 police officers from Jalal-Abad to assist in building communication and public interaction skills. UNODC additionally held consultations between civil society, the local government, crime prevention centres and the police to discuss how they can better work together in preventing crime in the city. Emerging from this, a new local crime prevention plan will be put forward by the city parliament this month for consideration.

"Good policing and providing a safe living environment are critical to the well-being of our local communities," noted Melis Turganbaev, the Minister of Internal Affairs, at the inauguration event of the new building. "The new police station will be fully accessible and it is our hope that more and more citizens will come forward to report crime and other safety concerns," he added.

The funding required to construct the police station itself was provided by the US Bureau of International Narcotics and Law Enforcement Affairs (INL). Speaking at the opening, Laura Griesmer, Chargé d'Affaires a.i. of the US Embassy in Bishkek said, "The United States Government funds projects such as these to build law enforcement capacity, which in turn, enhances public trust in security institutions. The end result is that local residents feel safer in the communities in which they live and work."

UNODC's Criminal Justice Programme focusses on comprehensive police reform, including the introduction of new competitive recruitment and performance evaluation policies for the police; the establishment of police stations in line with community policing principles; the development of measures aimed at increasing gender and minority representation in police; and strengthening police oversight and accountability.

The Sputnik police station is the second municipal police station that has been opened as a result of the partnership between the Ministry of Internal Affairs, UNODC and the US Government. In June 2014, the Tash-Tumshuk village police station in Batken province was renovated and provided with modern equipment and furniture. A crime prevention plan for this border area in the south of the country was adopted by the local parliament in November 2014.