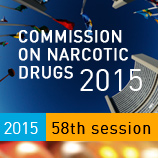 4 March 2015 - The global drug situation will be addressed at a series of meetings and events during the 58th Session of the Commission on Narcotic Drugs (CND), starting this Monday, 9 March 2015, at the United Nations in Vienna, Austria. Over the first four days (9-12 March), delegates from Member States will participate in a special segment in preparation for the 2016 UN General Assembly Special Session (UNGASS) on the world drug problem.

Following these discussions, the regular segment begins on 13 March and includes deliberations on changes in the scope of the control of substances, as well as the draft resolutions. This year, there are currently 12 draft resolutions on subjects ranging from international cooperation in responding to synthetic drugs to blocking the financial flows linked to drug trafficking. Another draft resolution concerns protecting young people and children from illicit drugs and new psychoactive substances sold over the internet.

Sixty-five side events will also be held during the 58th Session. The side events reflect the wide-ranging discussion on the world drug problem and cover such topics as sentencing reform and alternatives to prison; recovery from drug use; access to opioid medications in Europe; youth substance use and misuse; children, parents, families and prevention; overdose deaths and judicial cooperation, among others.

The 58th Session of the CND brings together delegates representing Member States, inter-governmental organizations, the civil society, and the media to discuss different approaches and develop more effective ways to jointly work on the issues to combat the world drug problem.

Join the conversation on Twitter by following @UNODC and using the hashtag #CND2015.

CND Draft Resolutions to be discussed