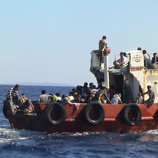 05 March 2015 - The smuggling of migrants across the Mediterranean poses both a humanitarian concern and a criminal threat. Each year, countless children, women and men - often those escaping conflict and other disasters in their countries - fall prey to organized crime.

As part of the United Nations' work in addressing this issue, a number of organizations met this week in London to discuss the collective responses being rolled-out around irregular migration. Speaking at the event held by the International Maritime Organization (IMO), Yury Fedotov, Executive Director of UNODC, highlighted the importance of closer cooperation between the organizations working to tackle this crime, and urged greater cooperation with the private sector and civil society: "By doing so, this will enable us to take advantage of synergies and comprehensively address the challenges posed by the different needs of migrants to ensure that our strategies respect their rights, and at the same time confront the criminal networks that prey on them."

To better contribute to the international efforts being rolled out in addressing the smuggling of migrants in the Mediterranean, Mr. Fedotov also announced a new strategy being developed by UNODC that offers an integrated response encompassing five mutually reinforcing actions:

With migrants facing dangerous and deadly situations, the need to act is urgent. Overcrowded boats, makeshift vessels, and unguided cargo ships which are prone to capsizing, sinking or being abandoned are just some of the perils being faced. Coupled with this humanitarian concern are the profits being generated by organized crime. In just one recent incident involving some 700 migrants, it was reported that people had paid up to $5,000 each for the journey from Turkey to Italy. This equates to a massive $3.5 million made from the desperation of migrants.

UNODC's new strategy is designed to operate within the context of the United Nations Convention against Transnational Organized Crime - a near universal international treaty which includes a specific Protocol against the Smuggling of Migrants. Through this, Mr. Fedotov explained, "the new integrated strategy to address the smuggling of migrants across the Mediterranean further builds on UNODC's expertise and experience, and we are seeking the support of Member States to implement this response".