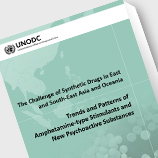 29 May 2015 - The demand for synthetic drugs in East and South-East Asia and Oceania continues to rise, while rapid economic integration is creating new opportunities for transnational criminal groups to expand the illicit drug trade, warned UNODC in a new report recently released under the Global Synthetics Monitoring: Analyses, Reporting and Trends (SMART) Programme.

The report - titled ' The Challenge of Synthetic Drugs in East and South-East Asia and Oceania: Trends and Patterns of Amphetamine-type Stimulants and New Psychoactive Substances 2015' - analyses recent trends and developments of the synthetic drugs market in the region, comprising both amphetamine-type stimulants (ATS) and new psychoactive substances (NPS). The report also highlights the harmful impact of the illicit trade in synthetic drugs on countries' development and the evolving challenges for Governments in their efforts to respond to this threat.

East and South-East Asia and Oceania have the world's largest ATS market which is dominated by methamphetamine in crystalline ('ice') and tablet ('yaba' or 'yama') forms. The illegal ATS trade is expanding and diversifying with the increasing availability of NPS which are not under international control. Moreover, the high availability of ATS precursor chemicals for legitimate industrial use in the region could increase the risk of their diversion for methamphetamine and ecstasy manufacture.

The significant increase in seizures might partly be the result of effective law enforcement measures, but also points to expanding manufacture and an increase of trafficking to and through the region, as the synthetic drugs market is becoming increasingly interconnected with other regions.

"Increased cross-border trade, regional integration and reduced border restrictions in Southeast Asia have also created opportunity for increasing the cross-border trafficking of drugs and the precursors needed to make them", said Jeremy Douglas, UNODC's Representative in Southeast Asia and the Pacific. "It is undeniable that many positive economic opportunities and benefits are being seen, but the activity of transnational criminal groups involved in the region's synthetic drug trade is also increasing, posing a challenge for governments and regional organizations like the ASEAN Secretariat to develop an effective response."

The reports notes that according to Government experts, the expansion of licit trade flows and rapid economic growth in the region has also helped to fuel the rising demand for methamphetamine and other synthetic drugs in most countries. In 2013, an increase in the use of crystalline methamphetamine, methamphetamine tablets and 'ecstasy' was reported in the region.

Until recently, the NPS market in the region has been dominated by the presence of ketamine, as well as the plant-based substances kratom and, more recently, khat. However, the number of NPS reported in East and South-East Asia and Oceania has increased significantly, from 34 substances in 2009 to 137 as of November 2014, with major increases within the synthetic cannabinoid group and the synthetic cathinone group, which mimics the effects of ATS. Ketamine seizures increased significantly to almost 10 tons in 2013, which marks an 85 per cent increase from the amount seized in 2012. Ketamine seizure information also indicates extensive inter-regional and intra-regional trafficking with ketamine from the East and South-East Asian region being mostly trafficked to Western Europe and North America.

"Given that the risk profile of new psychoactive substances are not yet fully understood, their proliferation poses unforeseen health and public safety risks in Asia and Oceania," said Justice Tettey, Chief of the UNODC Laboratory and Scientific Section. "In the absence of control measures and appropriate risk communication strategies for these substances in many countries, the challenges for law enforcement and public health are immense."

Given the growing complexity and interconnectedness of the illicit ATS and NPS trade in East and South-East Asia and Oceania, this report is an important contribution to the better understanding of the threat and impact of the region's synthetic drugs problem within a global context. The report also highlights the need for enhanced information exchange and cooperation on national, regional and international levels to establish an integrated effective response to the growing synthetic drugs problem.

Full Report: The Challenge of Synthetic Drugs in East and South-East Asia and Oceania: Trends and Patterns of Amphetamine-type Stimulants and New Psychoactive Substances 2015