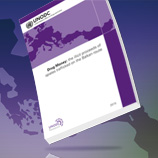 26 November 2015 - A new report launched today by the United Nations Office on Drugs and Crime (UNODC) shows that the total value of illicit heroin and opium trafficked from Afghanistan to Western Europe through the Balkans amounts to some $28 billion every year. Sixty-five per cent of this total ($18 billion) is generated in Western and Central Europe. The four largest European markets for heroin - France, the United Kingdom, Germany, and Italy - account for nearly half of the gross profits, as the major heroin benefits are made by traffickers on the retail markets.

The report also shows the Islamic Republic of Iran and Turkey as the two countries which interject the greater percentage of heroin and opium destined for Europe. Iran seizes about 30 per cent of the 155 tons of heroin and opium entering its territory every year, while Turkey seizes 17 per cent. All other countries in Europe interject an average of 6 per cent of heroin in their territory. Data show that the impact of illicit profits in the national licit economy across countries is significant, with heroin and opium traffickers gaining between 0.2 to 2 per cent of their country's GDP. For some countries this share is bigger than the public expenditures dedicated to drug policies - if all drugs, and not only heroin and opium, are considered. The large amounts of money generated through this illicit activity can distort the licit national economies in the region.

The launch of the report coincides with a new UNODC Regional Programme for South Eastern Europe, which was also unveiled today as one of the Office's responses in assisting countries in interdicting illicit financial flows. At the launch, UNODC Executive Director, Yury Fedotov, noted that information such as that contained in the new report is key to UNODC's work in the region. "UNODC is experienced at undertaking research that builds a detailed picture of the problem, while assisting Member States through effective and tailored projects and programmes." He further noted that by providing a detailed analysis of the situation, "the report can strengthen our evidence base for effective action in South Eastern Europe."

Set to run from 2016 to 2019, the Regional Programme will cover a wide range of activities, including: countering illicit drug trafficking and transnational organized crime; strengthening criminal justice, integrity and legal cooperation; and prevention treatment and care. Its work is undertaken in collaboration with Government partners and civil society, recognizing the challenges related to the links between illicit drug trafficking and organized crime and terrorists and extremists and ultimately aims to strengthen local law enforcement to help combat these phenomena.

Statement by UNODC's Executive Director at the event