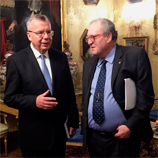 29 October 2015 - Discussions between the 79th Grandmaster of  the Order of Malta, Fra' Matthew Festing, and the Executive Director of the United Nations Office on Drugs and Crime (UNODC), Yury Fedotov, on 27 October in Rome have strengthened the excellent cooperation between the UN body and the lay religious order.

In their meeting, the two heads discussed a broad range of issues related to their common interest, including matters connected to the Order of Malta's global charitable and humanitarian work. The two also discussed the importance of working with young and vulnerable people.

"I very much look forward to working with the order on many issues related to UNODC's mandate in the future," said Mr. Fedotov.

In early 2012, Mr. Festing visited the UNODC headquarters to sign a joint statement that sought to establish a framework for future cooperation between UNODC and the Order. The high-level delegation from the Order of Malta also included the Grand Chancellor and Minister of Foreign Affairs Jean-Pierre Mazery, who signed the statement.

Speaking at the time of the visit in 2012, Mr. Fedotov praised the Order and said, "We share the same concerns about many transnational issues and our talks today will hopefully lead to a strengthened cooperation with the Order of Malta in the future."

Mr. Fedotov's visit to Rome was granted the special status of a state visit by the Order and Italy. The UNODC Chief's meeting with Mr. Festing also came at the start of a three-day mission that includes a meeting with President Mattarella, and a private audience with the Pope Francis.

During the mission to Italy the UNODC Executive Director will promote partnerships and build cooperation to help confront emerging security and social challenges, including smuggling of migrants and terrorism and radical extremism.

The Order of Malta, a lay religious order, carries out charitable and humanitarian work around the world and has Permanent Observer status with the United Nations.