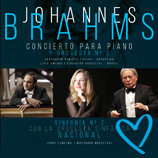 7 April 2016 - A Blue Heart Gala was recently organized at the Balboa Theatre in Panama City to raise awareness around the plight of victims of human trafficking and promote UNODC's Blue Heart Campaign.

The Blue Heart Campaign is a global initiative to combat human trafficking and raise awareness around its impact on society. To date, it has been adopted by 14 countries, and seeks to encourage involvement and inspire action to help stop this crime through awareness raising efforts and online promotion, including arranging a variety of art, culture and sporting events. It also builds political support to fight the criminals behind trafficking.

In support of the Blue Heart Campaign, during the 75th anniversary of the National Symphony Orchestra of Panama, a 'Blue Heart Gala Concert' took place at the Balboa Theatre in Panama City. Participants at the Gala included international guest artists such as pianist Alexander Panizza and conductor Ligia Amadio, who together performed Johannes Brahms' Concerto No. 2 with the Orchestra.

The Gala was attended by more than 1,000 guests from civil society, the diplomatic corps, and representatives of national and international organizations, academia and the private sector. The event was held jointly by UNODC, the Panama Ministry of Public Security through the National Commission against Trafficking, the National Symphony Orchestra and local partners from the private sector.