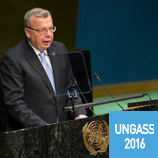 19 April 2016 - The Executive Director of the United Nations Office on Drugs and Crime (UNODC), Yury Fedotov, underscored the need for balanced approaches to drug challenges at the opening of the UN General Assembly Special Session on the world drug problem (UNGASS) in New York today.

Mr. Fedotov welcomed Member States's adoption, at the opening of the plenary, of an outcome document for the session, entitled "Our joint commitment to effectively addressing and countering the world drug problem".

In the outcome document, Member States reaffirmed their commitment to the goals and objectives of the three international drug control conventions, as well as their determination to "tackle the world drug problem and actively promote a society free of drug abuse".

In his opening remarks, Mr. Fedotov said he hoped the document's recommendations can help to promote the "urgent, united and concerted action we need".

"This UNGASS has provided a critical opportunity, at a critical moment, to build a more comprehensive and collective understanding of the challenges we face," he said, emphasizing the need for global drug policies that "put people first".

"Putting people first means balanced approaches that attend to health and human rights, and promote the safety and security of all our societies", as well as reaffirming the "emphasis on the health and welfare of humankind that is the founding purpose of the international drug conventions," said Mr. Fedotov.

He reaffirmed the engagement of UNODC, as the lead entity in the UN system in addressing the challenges posed by illicit drugs, in supporting governments to implement the UNGASS outcome document recommendations, including through action to:

He also highlighted the links between responses to the world drug problem and the implementation of Agenda 2030 and the Sustainable Development Goals.

Urging governments to recognize the common and shared responsibility for drug challenges, Mr. Fedotov called for more funding, particularly for countries with limited resources and capacities.

"Our integrated and balanced approaches to the world drug problem stand little chance of succeeding if stated political commitments are not fully backed by adequate financial resources," he said.