Progress and challenges: The dynamic nature of NPS 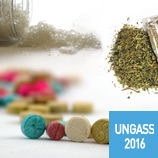 20 April 2016 - In 2012, the Commission on Narcotic Drugs expressed for the first time, its concern over the rapid emergence of new psychoactive substances (a.k.a. NPS). Four years on, more than 640 individual substances have been reported to the UNODC Early Warning Advisory, and over 100 countries and territories from all regions of the world have reported one or more NPS. On average, one of these substances enters the market every week.

Speaking at an event on this issue at the UN General Assembly Special Session on the World Drug Problem (UNGASS), Justice Tettey, Chief of UNODC's Laboratory and Scientific Section highlighted today how, to users, NPS mimic the effects of common controlled substances such as methamphetamine, heroin, cocaine, LSD, and others. "NPS are not controlled under the international drug conventions and with this they carry an aura of legality. Some users subsequently perceive them as safe. They are generally easy to make, readily available and may be cheap."

Yet while NPS are meant to mimic illicit substances, they also bear numerous undesired effects. Their use has ultimately led to increased abuse, dependence, hospitalization, and sometimes fatalities. Of great concern is that users often do not know what they are taking, or how much of a substance they are being exposed to.

The dynamic nature of the problem has also meant that research and monitoring activities are critical in improving understanding of the phenomenon.

"Progress has been made in tackling NPS, by tracking what is going, for example through the UNODC SMART programme, have improved our understanding of the problem, and subsequently informed the options for response," noted Mr. Tettey. "We are more aware of the issues that we face, and the lessons learned are helping both to enhance the preparedness of countries and boost international cooperation in reducing the supply of these substances."