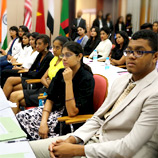 18 April 2016 - UNODC's Corruption and Economic Crime Branch, together with Mauritius' Independent Commission Against Corruption (ICAC), recently organized a Model Conference for 90 young people from 45 schools across the country. The participating high school students gathered to discuss potential anti-corruption measures in Mauritius that could potentially be presented to the States Parties of the United Nations Convention against Corruption (UNCAC).

The event aimed to enhance knowledge and understanding of corruption and related issues; provide opportunities for youth to share views and concerns about national and global anti-corruption strategies; sharpen youth communication and leadership skills; and add new momentum to the anti-corruption movement in Mauritius.

At the event's opening, the Acting Director-General of ICAC, K. Goburdhun, stressed that "the future of a country is in the hands of the younger generation and securing their involvement and engagement today will pave the way for a better tomorrow, where fairness, honesty, equality of opportunity and meritocracy could be the norms."

During the Conference, each school took the role of representing one UN Member State. The young delegates then analysed the existing anti-corruption commitments of the assigned country and identified the measures undertaken to fight corruption. They outlined the major achievements and pending challenges in each country's anti-corruption strategy and proposed new anti-corruption measures that could be implemented to mitigate the challenges identified. At the end of the Conference, the proposals were assessed by a jury panel led by former Chief Justice of Mauritius, Victor Glover. Lastly, the strongest delegations and speakers were awarded prizes.

Side events were organized by experts from universities in the US and South Africa, in collaboration with INTERPOL, Transparency Mauritius and UNODC. Through these interactions, participants learned more about corruption and the efforts to prevent and fight it, while having the opportunity to ask questions to international experts on the topic.

Simulating a real Conference of the States parties, the youth Model Conference developed, debated and adopted a resolution entitled "Promotion of the contribution of young people in preventing corruption and fostering a culture of respect and integrity". In the resolution, the young authors recommended that UN Member States, civil society, the media and schools undertake the prescribed measures to educate and include youth on corruption related issues. The participants made commitments to reinforce a culture of intolerance towards corruption while also tackling impunity. They invited all young people to join in this effort and proposed that other States should organize similar conferences. They also suggested that the UN consider an International Model Conference to be organized in the margins of the next session of UNCAC, to be held next year in Vienna.

Corruption is a key obstacle to progress and prosperity, hurting poor people disproportionately. It distorts markets, stifles economic growth and deters foreign investment. In many countries, resources lost due to corruption exceed the amount of development aid provided by international partners, wreaking untold damage on health, education and infrastructure to the detriment of those who need them most. The far-reaching provisions of UNCAC - the first and only global instrument designed to prevent and combat corruption - can help jumpstart development, lift countries out of poverty and build fairer, more just societies.