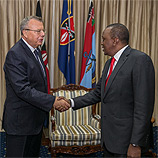 In his meeting with the President, Mr. Fedotov thanked President Kenyatta for Kenya's long-standing partnership with UNODC, including with the development of the new regional programme to support Eastern African countries in promoting the rule of law, and realizing security, justice and health targets under the Sustainable Development Goals.

"Regional cooperation and inclusive approaches to development are essential to confront the challenges of drugs, crime, corruption and terrorism," said Mr. Fedotov.

He further emphasized that "UNODC remains committed to working with Kenya and the countries of Eastern Africa to build robust criminal justice responses to terrorism, corruption, wildlife and forest crime, maritime crime, human trafficking and migrant smuggling; illicit drug trafficking and all other forms of organized crime."

During his visit, the UNODC Executive Director also met with other high-level officials from the region, and attended the Sixth Tokyo International Conference on African Development (TICAD VI) held in Nairobi, where he addressed the session on promoting social stability for shared prosperity.

On Monday, he launched the new UNODC Regional Programme for Eastern Africa at a high-level event focusing on the nexus between terrorism and transnational organized crime in the region.

"The link between terrorism and transnational organized crime has dire consequences for the entire region, undermining the rule of law and sustainable development. By helping countries implement Security Council resolution 2195, which stresses the need for regional coordination to fight cross-border terrorism, the Regional Programme will strengthen the capacity of East African member states to detect, prevent, and suppress these crimes at the national and regional level," said Mr. Fedotov in his opening remarks.

Ambassadors from donor countries as well as the representative of the African Union on peace and security, Admore Kambudzi, and the Director-General of the United Nations Office at Nairobi, Sahle-Work Zewde, also took part.

A signing ceremony was held at the conclusion of the event, and the resulting Nairobi Declaration was signed and witnessed by the African Union.

The new Regional Programme "Promoting the Rule of Law and Human Security in Eastern Africa (2016-2021)" covers 13 countries in the East African region (Burundi, Kenya, Rwanda, Tanzania and Uganda), the Horn of Africa (Djibouti, Eritrea, Ethiopia and Somalia), and the Indian Ocean islands off the East African coast (Comoros, Seychelles, Madagascar and Mauritius).

It addresses five thematic areas - countering transnational organized crime and trafficking, countering corruption, terrorism prevention, crime prevention and criminal justice, prevention of drug use disorders and HIV and AIDS prevention and care - and builds on the success of the UNODC 2009-2015 Regional Programme for Eastern Africa.