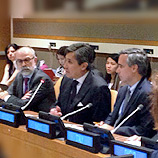 15 July 2016 - Around the world, many millions of migrants and refugees are in a precarious human rights situation in the context of large movements of people; such movement is rarely entirely 'voluntary' in the true sense of that term. While migration per se is not a problem, it is increasingly clear that everyone who moves in this perilous manner is in need of some form of protection. As rights-holders, all migrants are entitled to equal protection under international human rights law and related standards.

In preparation of the General Assembly-hosted High-Level Meeting on Addressing Large Movements of Refugees and Migrants, to be held on 19 September, UNODC and the Office of the UN High Commissioner for Human Rights jointly organized a Global Migration Group (GMG) discussion in recent days on protecting the human rights of all people in vulnerable situations within large movements.

The meeting, held in New York, was moderated by John Brandolino, Director of the UNODC Division for Treaty Affairs and co-chaired by the Ambassadors of Italy and Mexico to the United Nations in New York. The event highlighted the development of a set of Principles and Practical Guidance on the human rights protection of migrants in vulnerable situations and in mixed or large movements that is currently being developed by the GMG Working Group on Human Rights and Gender Equality.

Speakers also discussed the need to operationalise the standards of human rights protection to which all migrants are entitled; the core elements of migrant smuggling, as defined by international law, and the importance of protection measures as an essential component of a comprehensive approach to counter-smuggling; and the critical need to work towards evidence-based public narratives on migration that uphold the dignity and human rights of all migrants and refugees without discrimination.

Additionally, UNODC highlighted its work in this area and reiterated that for the response to migrant smuggling and human trafficking to be effective, it must be framed within the much wider context of the debate on development and human rights. As discussed by the meeting's participants, an integrated and comprehensive response, as required by the UN Transnational Organized Crime Convention's Protocol on Smuggling of Migrants, must be founded on the principle of shared responsibility, with the engagement of the whole of the international community.

To this effect, UNODC continues providing support to all countries in their efforts to protect migrants as rights holders, and to tackle organized crime to ensure the successful development of just societies that provide certain and consistent access to fundamental rights for victims of all crimes.

UNODC's work on Human Trafficking and Smuggling of Migrants