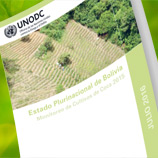 Satellite imaging and field monitoring revealed minor reductions between 2014 and 2015 in the Yungas de La Paz and Trópico de Cochabamba regions, from 14,200 to 14,000 ha and from 6,100 to 6,000 ha respectively. These two regions account for 99 per cent of the areas under coca cultivation in the country. In the Norte de La Paz provinces the cultivation area increased from 130 to 150 ha.

The potential coca leaf production in the country was estimated to be 32,500 tons in 2015. However, there is evidence suggesting that the production of coca leaf in Yungas de La Paz has been under-estimated due to a failure to update coca crop yield factors (expressed in tons of coca leaf per hectare of crops). In this regard, the report recalls the need to periodically update coca crop yield factor studies in order to produce a more accurate estimate of the national coca leaf production. In addition, the report stresses the importance of carrying out a study on the coca/cocaine conversion factor in order to estimate the potential production of this substance in Bolivia. 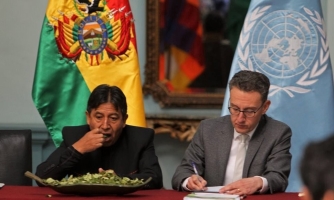 The total value of the coca leaf production in Bolivia declined from $282 to $273 million compared to 2014. This amount represents 0.8 per cent of Bolivia's overall gross domestic product (GDP) and 8.1 per cent of its agricultural sector GDP.

These figures reflect the main findings of the 2015 Coca Crop Monitoring Survey in Bolivia, carried out in the framework of the UNODC Support Programme for the Implementation of the Action Plan of the Strategy Against Drug Trafficking and for the Reduction of Surplus Coca Cultivation of the Plurinational State of Bolivia, with support from the European Union and Denmark.

According to data from the Directorate General for Coca Leaf Trading and Industrialisation, the main destinations of legally traded coca leaf in Bolivia were the departments of Santa Cruz, accounting for 37 per cent of the total amount of coca leaf traded nationwide, Tarija with 16 per cent and Cochabamba with 14 per cent, followed by the departments of Potosi and Oruro with 11 and 10 per cent, respectively. 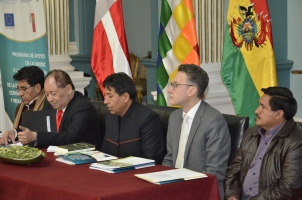 Between 2014 and 2015, the area eradicated declined by 1 per cent at the national level, from 11,144 to 11,020 ha, according to data from the Vice Ministry of Social Defence and Controlled Substances. Meanwhile, at the provincial level, 7,352 ha were eradicated in the region of Trópico de Cochabamba, 3,131 ha in the Yungas de La Paz and Norte de La Paz provinces, and 537 ha in the rest of the country.  On this point, the UNODC Representative in Bolivia, Antonino De Leo, highlighted that thanks to the eradication of 11,000 ha in 2015, the country had achieved a net reduction of coca bush cultivation of 200 ha.

In this regard, Mr. De Leo recalled the importance of the  outcome document of the Special Session of the UN General Assembly (UNGASS) on the world drug problem, issued in April 2016, which emphasizes "the promotion of inclusive economic growth and support initiatives that contribute to poverty eradication and the sustainability of social and economic development, develop measures for rural development, improving infrastructure and social inclusion and protection".

He also stressed that the inclusion and participation of local communities in the promotion of development initiatives to battle the environmental consequences of illicit crop cultivation and illicit production of narcotic drugs were recommended at UNGASS. 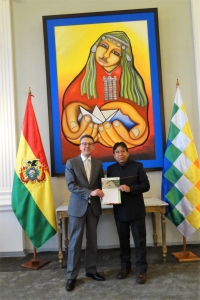 The UNODC Representative added that the fight against the world drug problem together with the 2030 Agenda for Sustainable Development should not be understood as two separate courses of action, but as complementary and mutually reinforcing. Echoing the words of UNODC Executive Director, Yury Fedotov, Mr. De Leo reminded that efforts against drugs, crime and corruption contribute to the much broader challenge of achieving sustainable development.