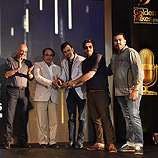 6 June 2016 - Recently, UNODC's office in South Asia received several Golden Mikes 2016 awards, which recognize the best work done in Indian radio advertising over the course of the past year. Together with its local radio partner, Radio Mantra, UNODC's Regional Office was the only international organization in the country to receive awards in three categories - all in the fields of radio promotion and innovation.

In the same vein as the recently-launched campaign on drug prevention, #ListenFirst, UNODC's work in the region seeks to raise awareness on science-based drug use prevention. This approach is an effective investment in the well-being of children and youth, their families and communities, and media - such as radio - can help share related ideas and resources which can better assist parents and teachers when listening to children and young people.

The award was given to UNODC for its efforts in drug use prevention among young people in India. Its "Radio-assisted Drug Abuse Prevention Programme", which uses popular music as one of several outreach tools, represents an innovative use of airwaves that UNODC and Radio Mantra developed under the name Music ka Nasha (music's "high"). This evolved into a campaign aimed at young people in the states of northern India, a region with a high prevalence of illicit drug use.

The Indian state of Punjab, where the Music ka Nasha campaign is largely focused, has been subject to the challenges of changing trends and patterns of drug use, including people starting drug use at an earlier age and the use of new psychoactive substances in increasing quantities. According to the 2015 Punjab Opioid Dependence Survey, there are some 232,000 opioid dependent drug users in the state.

Radio Mantra and UNODC launched the campaign on World Music Day, 21 June 2015. The week-long campaign was intended to promote music as an alternate high, and culminated on 26 June of that year, to mark World Drug Day. The campaign featured a multi-channel awareness raising strategy that used radio, social media, and 'edutainment' events to link popular music with drug use prevention efforts, ultimately reaching over five million listeners and setting the stage for further efforts by UNODC and its partners in this area.