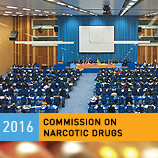 23 March 2016 - The 59th Session of the  Commission on Narcotic Drugs (CND) closed yesterday with a reminder of the UN General Assembly  Special Session on the world drug problem (UNGASS 2016) to be held in April this year.

"The 59th Session was especially important given that we now stand on the threshold of UNGASS 2016, which is to be held in New York next month," said UNODC Executive Director, Yury Fedotov, in his closing remarks.

Commenting on the finalisation by Member States of the outcome document, he said, "I warmly welcome the agreement on the outcome document to be adopted at UNGASS 2016 in New York in April. The document can now be used to forge the action needed to assist millions of women, children, and men around the world."

"I also see this April's UNGASS as a moment in time to create the necessary cooperation to address the world drug problem, to link our activities to the UN's overall work of achieving sustainable development, and to build momentum towards 2019 and the review of the  Political Declaration and Plan of Action on the world drug problem," said Mr. Fedotov.

Mr. Fedotov expressed his thanks to the representatives of member states for their efforts during the deliberations. "You have laboured long and hard to build a constructive dialogue. I applaud these endeavours," said Mr. Fedotov.

A number of  resolutions, including the outcome document for UNGASS, were passed at the 59th Session of the CND on matters ranging from mainstreaming gender perspectives into drug-related policies and programmes, to development and dissemination of the international standards of treatment of drug use disorders. Other topics of the resolutions passed included alternative development, and strategies for improving health and social wellbeing.

Seven substances were also  scheduled under the international drug control conventions by the CND following recommendations by the World Health Organization's Expert Committee on Drug Dependence.

Over  70 side-events and more than 30 exhibitions were held during the 59th Session, which was attended by more than 1,500 people representing member states, civil society, academia and international organizations.

In closing his remarks, Mr. Fedotov told delegates, "I look forward to meeting you again in New York next month at UNGASS 2016 as you continue the vital work of enhancing global approaches to international drug policy."

Outcome document of the Session [pending]

Information on the 59th Session of the CND