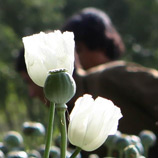 16 March 2016 - In recent days, UNODC presented a socio-economic analysis of the latest Opium Survey in Afghanistan, which revealed that opium poppy farmers gained considerably less in 2015 compared to the previous year. Figures in the analysis show that the gross income from opium decreased to $3100 per hectare in 2015 - 18 per cent less than the 2014 value of $3800 - and the lowest level since 2002, shortly after the end of the Taliban opium ban.

The analysis suggests that four moderate to poor harvests in a row in the main opium poppy growing areas, together with moderate prices, may have made less profitable to invest in new land and to keep high-maintenance fields with expensive irrigation systems. Moreover, opium yields have decreased possibly due to lower land productivity and disease. This is illustrated by the 38 per cent of farmers who have discontinued cultivation in 2015 and who have named agronomic and ecological conditions - such as poppy pests, diseases and bad yields - as reasons for their decision, suggesting that poppy is not such a highly profitable cash crop anymore.

During field interviews, several women gave their view on opium cultivation. These farmers seem to be aware of the illicit nature of the crop, but the reasons they give to grow it include their economic necessity. A woman interviewed in the Afghan province of Faryab acknowledged this motive, which is still generally important to start growing opium poppy. "We know that it is harmful for humans but we have more [income related] problems, so we have to cultivate poppy to solve our life problems."

Based on the interviews with the farmers, the analysis also shows that in many cases their dependency on poppy cultivation does not seem to be related to the income from poppy sales per se. A significant restriction for farmers to grow alternative crops is the limited access to markets in the main poppy growing areas. Other limiting factors include the need for non-farm job opportunities, better physical and social infrastructure, and enhanced strategies to address political crises and conflicts.

Through documents like the socio-economic analysis of the Afghanistan Opium Survey, UNODC assists countries in identifying, analyzing and monitoring global drugs and transnational organized crime threats, helping the international community to define appropriate drug and crime control priorities in general, and in particular to support alternative development initiatives.