9 March 2016 - The Container Control Programme (CCP), developed jointly by UNODC and the World Customs Organization (WCO), aims to enhance law enforcement capabilities in seaports and other similar facilities. The Programme seeks to minimize the misuse of containers in the transnational shipment of illicit goods. Additionally, it helps in the development of strategic alliances between customs and other law enforcement bodies, and makes use of different trainings, new technologies and mechanisms to improve the detection of contraband. The CCP actively reduces the possibility for drug trafficking and smuggling of various illicit consignments such as chemical precursors, arms, ammunition, endangered species, and nuclear material, among others, while at the same time facilitating licit trade.

The large volume of containers, and the speed of handling them, is a challenge to law enforcement agencies trying to identify illicit shipments in this supply chain. Most of these containers are virtually uninspected, allowing contraband to enter countries undetected. In 2004, the CCP was thus established to assist in countering these threats.

Showcasing some of the recent successes of the CCP, the following are just a few examples of the Programme's work across the globe. More information can also be found in the newly launched Annual Report for 2015.

The encouraging impact the CCP has had in maritime ports has led to an expansion of operation into airports. Toward the end of 2015, Pakistan organized a two-week long training for a new Air Cargo Profiling Unit at the country's largest airport - Jinnah International in Karachi. Considering that this facility handles more than 50 per cent of the country's air cargo, its importance for Pakistan's trade makes it significant within the context of the CCP.

Together with the Pakistan Government, UNODC and WCO helped to establish the cargo unit, which is mandated to profile cargo processed at the airport in order to minimize the risk of air consignments being used for illicit activities. The sessions were attended by experts from Denmark, France, Japan, the United Kingdom, UNODC, WCO, and the International Civil Aviation Organization, as well as officials from Pakistan's Federal Board of Revenue, the Anti-Narcotics Force and the Civil Aviation authorities. WCO and the UK Border Police provided the instructors, and the training received financial support from Denmark.

In the future, UNODC plans to expand this model, known as CCP-AIR, to other major airports in Pakistan, including Islamabad and Lahore. Since the 2008 inception of the CCP in Pakistan, authorities have seized more than 50 tons of cannabis, three tons of heroin, and 30 tons of chemical precursors.

CCP-AIR is also expected to be rolled out to other countries this year, including Jordan and Ukraine.

Uganda and Tanzania join the CCP 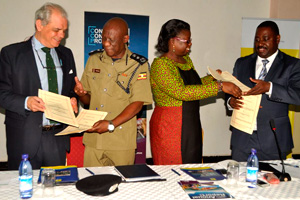 Uganda formally joined the CCP in December 2015, when the Government and UNODC completed the adhesion process. The Programme will allow the Eastern Africa country to tackle illicit trafficking in its cargo facilities. Through the joint efforts of Uganda's revenue, police and wildlife authorities, a multi-agency Port Control Unit (PCU) is being established.

The Executive Director of the Uganda Wildlife Authority, Andrew Seguya, said the project will serve to counter crime such as illicit trafficking in wildlife and wildlife products, while noting that the partnership also needs complementary capacity building support in order to improve investigative, intelligence gathering and prosecution efforts.

The most recent member of the CCP is Tanzania, which joined the programme on 18 March, 2016. With the expanding country membership in East Africa, the CCP network is becoming more robust in detecting illegal shipments transiting through the regional ports. It is expected that Kenya will also join the CCP in 2016.

In the Middle East and North Africa (MENA) region, the security situation makes it vulnerable to illicit trafficking, organized crime and terrorist activities, while a proper risk analysis of containers and cargo can strengthen cooperation and coordination to stop illicit trafficking.

With this in mind, twelve states - Bahrain, Egypt, Jordan, Lebanon, Libya, Oman, Palestine, Qatar, Saudi Arabia, Sudan, Tunisia and the United Arab Emirates - along with the Pan Arab Bureau for Narcotics Affairs, the Gulf Cooperation Council and the Regional Intelligence Liaison Office for the Middle East met in Amman, Jordan, in December 2015 to promote border control and facilitate legitimate trade.

Jordan became the first country in the region to join the CCP through the establishment of a PCU - comprising customs, police and intelligence officials - in the port of Aqaba. Since the unit became operational in September, important seizures of illicit drugs and counterfeit medicines have been made. The country intends to develop the air cargo model of the CCP in 2016. The MENA region is a nodal point connecting Africa, Europe and Asia through strategic maritime and air transit links. The CCP in this region will help strengthen container security, which will create benefits beyond its borders. 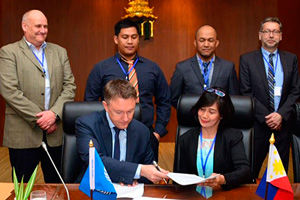 In January 2016, the Philippines became the latest member country from the Association of Southeast Asian Nations (ASEAN) to formally join the CCP through a Memorandum of Understanding signed between the Bureau of Customs Commissioner and UNODC.

On the occasion, Jeremy Douglas, UNODC Regional Representative in Southeast Asia and the Pacific, said: "The signing of this MoU comes at an important time for the Philippines at the dawn of the ASEAN Economic Community, when higher priority must be given to maritime security, connectivity and trade facilitation. The CCP is already starting to achieve significant results in other countries of Southeast Asia, and we hope the Philippines can soon join in making seizures and assisting to disrupt the transnational criminal groups and terrorist organizations that seek to utilize the containerized supply chain to transport their illicit consignments."

The Philippines, comprising 7,107 islands and a coastline extending over 36,000 km's, handles approximately 5.5 million TEU containers per year, with over 3.5 million of those passing through the port of Manila and the Manila International Container Terminal. In this light, a PCU will be established under the newly created National Coast Watch Centre, and will comprise customs, coast guard and police officers. The Philippines will also become the first country in the region to benefit from the WCO Cargo Targeting System, which allows detailed analysis of pre-arrival information to target consignments likely to contain illicit goods as well as assistance in speeding the clearance of cargo and facilitating licit trade.

The Philippines thus joins other ASEAN countries in the CCP - Thailand, Viet Nam, Indonesia, Cambodia, Myanmar and Lao PDR - with Malaysia expected to sign on in the coming months.

Globally, the CCP is operational in 28 countries and has initiated activities in a further 24. Since its inception, the Programme has established more than 50 Port Control Units, leading to significantly increased detections and confiscation of drugs and other illicit goods.