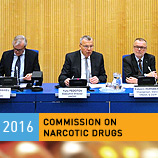 UNGASS 2016 preparations, prevention and treatment of drug use, alternatives to incarceration and the death penalty were the focus of informal dialogue with civil society held on 17 March

"UNODC works with over 500 non-governmental and civil society organizations at the local, national, regional and global levels. Together, we have helped increase access to evidence and rights based treatment and care in over 40 countries," said Mr. Fedotov in his opening statement.

Answering a question on the death penalty, Mr. Fedotov noted that UNODC followed successive resolutions on the issue from the UN General Assembly and had raised the matter in discussions at the highest levels with countries. He said his own position was entirely clear and he once again reiterated that the death penalty was neither in the "letter or the spirit of the international drug control conventions."

Regarding UNODC's views on alternatives to incarceration, he said that the office has highlighted the fact that the conventions provide for alternatives to conviction or punishment, where appropriate. Mr. Fedotov said UNODC would "advocate for this approach in appropriate drug-related cases of a minor nature, including possession for personal consumption."

Asked if the UNGASS process was transparent and open, he replied that the process was one of the most inclusive he had experienced. Mr. Fedotov pointed to the active participation of NGOs and CSOs, and highlighted a series of events that had been held for the benefit of civil society in the lead up to the UN General Assembly Special Session in New York (19-21 April).

"But, UNGASS 2016," he said, "is not the final destination, it marks a new journey towards 2019 and the review of the Political Declaration and Plan of Action on the world drug problem."