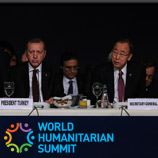 23 May 2016 - This week, the first  World Humanitarian Summit (WHS) is taking place in Istanbul, Turkey, bringing the global community together to reaffirm its collective commitment to humanity and its solidarity with people affected by crises. In connection with the WHS, UNODC is organizing a special event, together with the Government of the United States, to highlight human trafficking in the context of humanitarian situations.

The UNODC/US special event during the Summit will explore best practices and lessons learnt, and identify what needs to be done to better respond to the needs of trafficking survivors through a frank conversation between Member States, UN entities, survivors, and civil society. In particular, the event will feature the Nobel Peace Prize Nominee and one of Time Magazine's 100 Most Influential People of 2016, Nadia Murad Basee Taha, a survivor of sexual trafficking. Ms Taha has testified before the Security Council and met with world leaders to discuss the plight of the Yezidis, the community to which she belongs.

Speaking ahead of the event, Simone Monasebian, Director of UNODC's New York Office, noted that it was critical to protect the already-vulnerable victims of humanitarian disasters from the further threat of human trafficking and smuggling. She stressed the need to mainstream the issue of human trafficking and smuggling of migrants into the broader policies and programmes of the UN, including humanitarian relief and assistance and natural disaster and post-conflict reconstruction.

As a backdrop to this event, the Secretary General recently highlighted the various aspects of trafficking in persons during humanitarian situations in his report in preparation for the Summit ( One Humanity: Shared Responsibility ), such as a risk to be considered during armed conflict; as a protection problem affecting the empowerment of women and girls; and as a threat to migration with dignity. These pressing concerns were also highlighted in the global and regional preparatory meetings leading up to the Summit (included on the WHS Synthesis Report Restoring Humanity: Global Voices Calling for Action ).

The high-level event responds to the increased momentum within the United Nations to address trafficking in persons following last year's adoption of the Sustainable Development Goals which include tackling this crime in a number of targets contained in Goals 5.2 (Gender Equality),16.2 (Peace and Justice) and 8.7 (Decent Work). It will also inform next year's appraisal of the General Assembly Global Plan of Action to Combat Trafficking in Persons.

At the Istanbul Summit, leaders from government, business, and civil society, will announce concrete actions and commitments to ending conflict, alleviating suffering and reducing risk. The Summit will also serve as a platform to exchange experiences and showcase innovations and best practices.