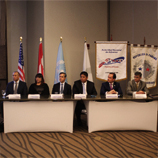 17 November 2016 - The annual Container Control Programme (CCP) meeting for the Latin American and Caribbean region is being held in Panama from 14 to 17 November 2016, bringing together officials from 15 countries as well as representatives from donor countries. The joint UNODC/World Customs Organization (WCO) programme, established in 2004 initially in Ecuador, seeks to improve the capacity of customs and other relevant law enforcement officials to detect and disrupt the flow of illicitly trafficked goods, while facilitating legitimate trade and raising state revenues. The Programme is built around a layer of activities that help create, strengthen and sustain inter-agency Port Control Units.

In his welcoming address at the meeting, the fourth that has been held for the region, John Brandolino, UNODC's Director for Treaty Affairs, commended the professionalism and commitment of national authorities' in combatting transnational organised crime. He also highlighted the further expansion of CCP in the region, including the coming launch of CCP-AIR and the possible establishment of a regional CCP training centre in cooperation with the International Maritime University of Panama. The meeting provides an annual opportunity for exchanging information and experience, networking, as well as strengthening cooperation to promote trade.

The success of the programme is due in large part to the active participation of its partner countries: Panama, Guatemala, Ecuador, Paraguay, Suriname, Guyana , Dominican Republic and Jamaica. Together, 18 operational Port Control Units have been established in the region.

In 2016 thus far, approximately 10 metric tons of cocaine was seized in 39 different cases. A further 585 kilograms of marijuana have been seized in two different cases. A number of seizures took place related to arms and ammunition, IPR goods, restricted goods, contraband, undeclared money, and tax evasion.

The Programme will next expand to seven additional countries: Argentina, Brazil, Peru, El Salvador, Honduras, Cuba and Costa Rica. An air-cargo component is also being introduced in several countries. The new CCP-Air activities mirror the same structure and training methodology as the long established CCP-Sea programme. Pilot projects have been started in Afghanistan, Pakistan and Jordan. In Latin America, a first CCP-Air unit will be established in the international airport of San Jose Marti in Havana, Cuba. In this case, CCP-Air will be implemented with the support of the International Civil Aviation Organization (ICAO). CCP activities in the Latin America and Caribbean region are made possible through the support from Canada, the United States and the United Kingdom.