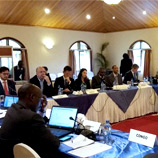 14 November 2016 - The International Conference on the Great Lakes Region (ICGLR) and the Office of the United Nations Special Envoy for the Great Lakes seek to follow up on existing recommendations made to facilitate the administration of justice through judicial cooperation in the Great Lakes region.

To that end, it was organized a two-day meeting in Nairobi, Kenya, to lay the foundation for a Great Lakes Regional Judicial Cooperation Network (GLJC Network) comprising the 12 member states of the ICGLR. The meeting, which took place on 10-11 November, brought together public and military prosecutors, legal experts from the Office of the UN Special Envoy, ICGLR, the United Nations Stabilization Mission in the Democratic Republic of the Congo (MONUSCO), UNODC, UNDP, the West African Network of Central Authorities and Prosecutors (WACAP), as well as partners from the East African Association of Prosecutors, Africa's Sahel Judicial Cooperation Platform, the International Centre for Transitional Justice, the European Judicial Cooperation Network, and the German Federal Enterprise for International Cooperation (GIZ).

The GLJC Network is intended to contribute to the prevention and punishment of trans-border organized crimes committed in Africa's Great Lakes region. The GLJC Network will provide a forum to facilitate effective and collaborative legal actions at the regional level, and contribute to promoting the fight against impunity in crimes committed by organized groups and negative armed forces operating in the region.

Regional cooperation in criminal matters is needed if the region is to deal effectively with the broad array of crimes, which take place in individual countries, but have significant cross-border and regional effect.

The establishment of the GLJC Network is a follow-up to the decision of the 5th ordinary summit of the heads of State and Government held in Luanda, Angola, on 15 January 2014. The proposed Network is a regional cooperation tool for criminal matters for the use of judicial actors from the 12 ICGLR member states and other countries in the region and it will be based on the model of the WACAP.