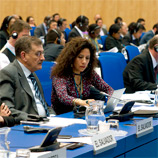 21 October 2016 - The Eighth Session of the Conference of Parties to the Palermo Convention today reinforced a growing acknowledgement that transnational organized crime undermines sustainable development and causes havoc in vulnerable and fragile societies.

In his remarks, UNODC Executive Director, Yury Fedotov, stated that work against transnational organized crime had received a considerable boost in recent years.

Mr. Fedotov said: "By recognizing that crime can hinder and obstruct sustainable development, the Sustainable Development Goal's, and the Doha Declaration before it, have made an evolutionary leap in the way crime is perceived."

Other examples of this understanding included the adoption of the ground-breaking New York Declaration for Refugees and Migrants, which recognizes their vulnerability to smuggling and trafficking. The recent 10-year review of the UN Counter-terrorism Strategy also signalled a need for further work on how terrorists benefit from organized crime.

Describing the UN Convention against Transnational Organized Crime (UNTOC) as one of the most powerful tools to combat the criminals, Mr. Fedotov said this week's biennial COP had played a pivotal role in unlocking the Convention's potential for bringing governments together and sharpening responses to transnational crime.

He also said that the landscape where UNODC operates has never been clearer, but acknowledged that this placed a heavy responsibility on UNODC to deliver the right assistance, and to form the strongest possible partnerships for work on the ground.

Held every two years, the Conference of the Parties to the UN Convention Against Transnational Organized Crime attracts some 800 participants drawn from Member States, ministries and civil society.