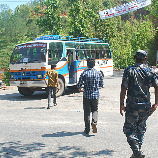 28 October 2016 - Tackling human trafficking is not a simple or trivial pursuit said, yesterday, UNODC Executive Director, Yury Fedotov, urging States to implement all provisions of the so-called 'Palermo protocol,' the nearly universal UN treaty that contains a 'blueprint' for successfully preventing and suppressing the scourge while punishing perpetrators.

At a Headquarters event on 'Countering Human Trafficking by Achieving Universal Ratification of the Protocol to Prevent, Suppress and Punish Trafficking in Persons, especially Women and Children 'Palermo Protocol,' Mr. Fedotov welcomed a discussion about global efforts to combat human trafficking.

The event comes just before the General Assembly's appraisal of the UN Global Plan of Action to Combat Trafficking in Persons and follows last week's  Eight Session of the Conference of Parties to the UN  Convention against Transnational Organized Crime and September's UN  Summit for Refugees and Migrants.

In his remarks during the conference, Mr. Fedotov cited the importance of the Convention and its 'Palermo Protocols'- named after the Italian city where the treaty was agreed - on trafficking in persons and migrant smuggling, as well as the Sustainable Development Goals ( SDGs).

"These targets deliver a clear message to the world's criminals that the focus on crime is no longer on the periphery of building sustainable development," he said.

A forthcoming UNODC report reveals that much of human trafficking follows major migratory routes. In most cases, trafficking victims are foreign to the country in which the trafficking takes place, and nearly 80 per cent of all victims are women and children.

"The fate of people, trapped by inhuman traffickers in a net of violence, abuse, and exploitation, strongly motivates our work. As a catalyst for these efforts, countries need to ensure the clear and unambiguous implementation of the Palermo Convention and its human trafficking protocol," he underscored.

While there is a nearly universal ratification of the Convention - 187 countries have adopted it - challenges in implementation persist. Mr. Fedotov called upon countries to apply the Convention and to create a "solid and efficient network of operations, information sharing and mutual legal assistance designed to eliminate human trafficking."

He outlined three immediate responses that countries should take:

"We must also go after the money," he urged. "Traffickers should never be allowed to reap immense profits from pain, misery, and suffering."

He advocated a stronger focus on resource allocation as well as a strategic shift to target criminal networks while safeguarding and protecting victims, which will require an increase in efforts from police, protracted legal actions, cross border investigations with the support of intelligence sharing, and joint operations.

"We want to live in a world where human trafficking no longer exists. If we are to do this, we must unite and deliver effective and efficient action on the ground to achieve this goal. This means more cooperation, more political commitment, more determination to arrest, detain, and prosecute the guilty perpetrators."

Summit for Refugees and Migrants