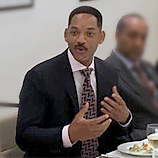 10 October 2016 - In recent days, actors and humanitarians Will Smith and Jada Pinkett Smith held a working lunch with the Group of Friends of the UNODC to discuss the priorities of the Will and Jada Smith Family Foundation (WJSFF) and the United Nations' work to promote peaceful, just and inclusive societies. Dedicated to the betterment of the world around us, WJSFF "helps individuals and organizations advance in areas where need is great," focussing on Education, Empowerment, Health, Community Development, Sustainability and the Arts.

The lunch, chaired by the Permanent Representative of Austria to the United Nations in New York, Jan Kickert, as President of the Group of Friends, covered a wide range of topics, from the WJSFF's efforts to support youth, sustainable development, promote understanding and fight human trafficking, as well as recent developments within the United Nations in its implementation of the 2030 Sustainable Development Agenda.

The meeting highlighted the importance of private-public partnerships in furtherance of Sustainable Development Goal 17, and the role of the arts in promoting peace and justice. According to UNODC Executive Director, Yury Fedotov: "Art is a powerful advocacy tool to raise awareness and we have always used it to complement our work. We commend the Will and Jada Smith Family Foundation for its efforts in furtherance of our shared goal for a safer, more just and peaceful world."

Hosted at the Permanent Mission of Austria to the United Nations in New York, the lunch was attended by the ambassadors of Morocco, South Africa, Kenya, Belarus, the U.S., Jamaica, Costa Rica, Mexico, Andorra, Albania, Thailand, Canada, Sweden, Kazakhstan, Germany, the European Union Delegation and the Chef de Cabinet of the Office of the President of the General Assembly. Mr. and Mrs. Smith also visited the Security Council and the General Assembly during their UNODC hosted visit.

Mr. Smith was nominated for two Academy Awards for Best Actor for his performances in "Ali" and in "The Pursuit of Happyness." He has also starred in "Men in Black", "Independence Day", "Concussion" and "Suicide Squad" as well as many other films. Mrs. Smith is best known for her roles in "The Matrix", "The Women", "Madagascar", "Bad Moms" and is the Executive-Producer of the acclaimed CNN documentary "Children for Sale: The Fight to End Human Trafficking."

Will and Jada Smith Family Foundation