Panama: Fashion as a channel to promote social reintegration and prison reform 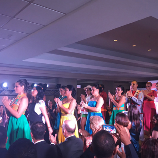 12 October 2016 - Last week, the Government of Panama and UNODC launched the IntegrArte (Integration + Art) commercial brand with a view to promote a more sustainable social and labor reintegration of people deprived of liberty through the production and marketing of high quality and competitive hand-made products.

The brand was launched by the Vice-President and Minister of Foreign Affairs, Isabel Saint-Malo, the Minister of Government, Milton Henríquez, and the UNODC Deputy Executive Director, Aldo Lale-Demoz, with the presence of senior government officials, diplomatic, media and civil society representatives.

During his speech, Mr. Lale-Demoz mentioned that IntegrArte "is a practical and real example of effective attention to people deprived of liberty, and is fully in line with key international instruments on prison reform such as the Bangkok and the Nelson Mandela Rules."

Immediately following the launching ceremony, a fashion show began, comprising men and women deprived of liberty showcasing the products of the first IntegrArte collection, ranging from furniture to prêt-à-porter clothing and accessories.

This initiative is the result of a partnership linking the Panamanian Government, UNODC, and the European Union. Before the end of the year, major national shops will start marketing the IntegrArte collection. In addition to this national initiative, UNODC is in the process of preparing for the development of a global brand of prison products under the Doha Declaration Global Programme.