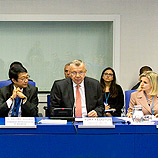 17 October 2016 - At a special event on human trafficking, the Executive Director of UNODC, Yury Fedotov, today called on countries to join the fight against traffickers and migrant smugglers and to fully implement the UN Convention on Transnational Organized Crime (UNTOC).

"I urge every country to do so within the shortest possible timeframe, and by doing so, join the world in the fight against the traffickers and smugglers," he said.

Mr. Fedotov applauded the New York Declaration adopted at the UN General Assembly's Summit for Refugees and Migrants and said it contained a strong commitment to implement UNTOC and its protocols on trafficking in persons and migrant smugglers.

He said the large-scale movements of people vulnerable to violence and exploitation had increased the need for the international community to comprehensively tackle these transnational organized crimes.

According to UNODC's research, seventy nine per cent of detected victims are women and children, said Mr. Fedotov. The majority of victims found in all regions are foreigners in the country of detection, and many are migrants.

"Our goal must be to stop women, children and men from becoming victims, and to end the impunity of the criminals involved in human trafficking," he said.

Mr. Fedotov stressed the need for a fundamental change in the way resources are allocated. Funds, he said, should be shifted towards strategic goals such as targeting the criminal networks and their financial flows. UNODC was committed to ensuring that the New York Declaration's implementation was a high priority throughout the UN system.

"We will work intensively with our UN partners, Member States and all other stakeholders to keep this issue firmly on the political agenda and to ensure it receives the response it so desperately deserves," he said.

Mr. Fedotov was speaking at an event, organized by UNODC and the United States, on the margins of the eighth session of the Conference of Parties to UNTOC.

The event, titled Countering trafficking in Persons - Contributing to a Global Compact on Migration, brought together several high-level speakers on enhancing  the implementation of UNTOC's protocol on trafficking in persons in line with the priorities agreed under the New York Declaration.  Countries have committed themselves, under the declaration, to start negotiations for the adoption of a global compact for safe, orderly  and regular migration in 2018.

Other participants included Susan Coppedge, Head of the US Department of State's Office to Monitor and Combat Trafficking in Persons, Myria Vassiliadou, European Union Anti-Trafficking Coordinator, and  Rahel Gershuni, Independent Expert. The event was moderated by Rachmat Budiman, the Permanent Representative of Indonesia to the UN in Vienna.