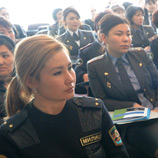 28 April 2017 - While gender-based violence (GBV) continues to be a widespread problem in Kyrgyzstan, the level of reporting remains low, according to the Kyrgyz National Statistics Committee. Data also confirmed that 14,467 people turned to crisis centers and other institutions providing social and psychological assistance in 2015, a 26 per cent increase from 2010. In 2014, the police registered over 3,500 cases of GBV, compared to 1,800 in 2010. A survey on public safety conducted by the Civic Union for Reform and Results has shown that many victims of crime and violence do not go to the police.

On that matter, Koen Marquering, UNODC International Coordinator said: "This is a complex, multifaceted issue, but one reason for low levels of reporting is that victims of violence may be more comfortable talking to a female officer," adding: "Unfortunately, there are very few certified police women in the country, in particular at the local level."

Based on data from the Kyrgyz Ministry of Interior, in 2016, 5.9 per cent of all certified police officers were women, 4.3 per cent of whom belonged to an ethnic minority. "Modern policing is all about engaging with people in the community to solve problems," Mr. Marquering stressed, underlining: "Women are often great communicators with strong ability to defuse situations that could potentially turn violent. This is why a diverse gender and ethnic composition of the police service and balanced patrol teams are so important."

To increase access to professional opportunities for women in law enforcement and strengthen the capacity of relevant bodies to safeguard the rights of women and youth in line with international standards, UNODC is engaged in several initiatives. Such steps will raise the profile of women and promote community policing in order to address priority issues such as gender-based violence.

With UNODC's assistance, during the past month, 200 female police officers from police departments in all regions of Kyrgyzstan received training on criminal legislation, criminal investigations and crime prevention, including the prevention of violent extremism and gender-based violence. Following the first gathering in Osh in March, a second round of training, which also teaches communication and presentation skills, is taking place in Issyk Kul from 25-28 April 2017.

The introduction of a leadership training program for police officers and initiatives to promote gender sensitive police services in local communities are also being developed. This includes dialogue platforms on gender-based violence in pilot locations and support for the implementation of measures within the framework of local crime prevention plans, which have been developed and piloted with UNODC support. Expert advice to strengthen data collection and analysis on domestic and other forms of gender-based violence is also part of the project in support of Kyrgyzstan's efforts in monitoring progress towards the achievement of the Sustainable Development Goals.

These activities are implemented within the framework of the UNODC Programme for Central Asia 2015-2019 with support from the United States of America.