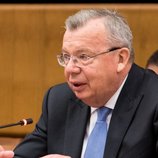 25 August - Partnership with the private sector is essential to address the challenges of human trafficking, the Executive Director of the UN Office on Drugs and Crime (UNODC), Yury Fedotov, told business leaders from the Pacific region today.

"Businesses can help stop crimes such as human trafficking and forced labour from gaining a foothold in our communities and supply chains," he said.

According to UNODC's Global Report on Trafficking in Persons 2016, most victims in East Asia and the Pacific are trafficked for sexual exploitation. Females make up 77 per cent of all detected victims in this part of the world.

Mr. Fedotov stressed businesses have an essential role to play against the traffickers. "Businesses can advise governments, implement sound and humane practices and mobilize much-needed resources to carry on the fight for justice, in line with the 2030 Agenda for Sustainable Development," he said.

Regional government representatives and private sector leaders attended the meeting to consider ways to combat human trafficking and other forms of exploitation.

The forum follows a decision made at the Sixth Ministerial Conference of the Bali Process in March 2016 to engage in a partnership with the private sector and to promote humane, non-abusive labour practices throughout business supply chains.

Established in 2002, the Bali Process discusses people smuggling, human trafficking and other connected transnational organized crime. More than 50 countries participate in the process, which is jointly chaired by the governments of Australia and Indonesia.

Mr. Fedotov also held meetings with the Foreign Ministers of Australia and Indonesia to discuss the work of UNODC's Regional Office for Southeast Asia and the Pacific, which is headquartered in Bangkok and led by UNODC Regional Representative Jeremy Douglas.