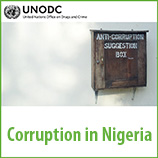 21 August 2017 - The first-ever household survey on bribery in Nigeria, launched recently in Abuja, revealed the scope and impact of bribery on citizens when in contact with public officials. Conducted by UNODC and the National Bureau of Statistics (NBS), the research finds that on average, almost one bribe is paid by every adult citizen per year to public officials and that the average amount paid in cash for a bribe is equivalent to a fourth of the average monthly salary.

Covering a one-year period, the survey revealed that a total of 82.3 million bribes were paid amounting to Naira 400 billion (the equivalent of $4.6 billion in purchasing power parity). Bribes are mainly paid to speed up and finalize administrative procedures, to avoid payments of fines and cancellation of public services. The same report shows that the recruitment process of public officials is vulnerable to bribery with 15 per cent of households who had a member getting a job in public administration reporting to have paid a bribe.

As noted in the report, not all those who were requested to pay a bribe do so, although the percentage of citizens refusing a bribery request is as low as 5 per cent. Among those who pay bribes, few report it to Nigeria's competent agencies due to various reasons, including no follow-up to reported cases and experience of negative consequences when reporting.

The survey confirms that those cognizant of the country's specialized anti-corruption agencies consider them effective. However, according to the same report, bribery cases are mostly reported to the police rather than to these agencies.

The survey, funded by the European Union (EU), was conducted as part of the cooperation project "Support to Anti-Corruption in Nigeria." It was based on data collected in a large-scale survey of 33,067 households across Nigeria, covering 36 states and the Federal Capital Territory.

The survey provides solid evidence on the nature and extent of administrative bribery and generates actionable data on patterns and modalities of bribe-paying. It also highlights areas of vulnerability in the public administration and examines policy implications that suggest measures to increase efficiency, transparency and accountability in the public sector to prevent corruption. The survey is the largest-ever study of its kind conducted on the African continent.

2017 survey on Corruption in Nigeria: Experience and response to bribery (2017)