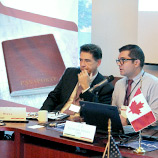 26 July 2017 - Smuggling of migrants can take many forms. It may be planned in advance and highly organized, involving the use of sophisticated methods such as falsified travel documents.

In order to discuss the most important topics related to travel documents security, representatives from 12 countries recently met in Mexico at the premises of Ministry of Foreign Affairs to participate in the "Passport Integrity Workshop". The normative, physical and biometric security elements, integrity risks, fraud and their relation with organized crime were addressed at the 2-day meeting.

Delivering opening remarks, Felipe De La Torre, UNODC Programme Management Officer, said that issuance of apocryphal documents was a crime by itself but, at the same time, it was a technique for committing other serious crimes such as trafficking in persons and smuggling of migrants. "UNODC, through its #DeadlyBusiness campaign, aims to raise awareness on the linkage between smuggling of migrants by air and using false travel documents," he added.

Joining him, Ms. Socorro Flores Liera, Undersecretary of Latin America and the Caribbean, Ministry for Foreign Affairs of Mexico, emphasized the importance of the initiative and drew attention to the ongoing challenges in the region.

Ms. Flores said: "Through the issuance of passports with high standards of reliability, each State contributes to the full exercise of the people' rights, regardless of their immigration status, while contributing to raise international security standards," describing information exchange as vital in combating organized crime.

As a result of the "Passport Integrity Workshop", a compilation document with conclusions, best practices and key recommendations will be elaborated in order to enable Member States to implement them in their countries.

The workshop builds on the XXI Vice-Ministerial Meeting of the Regional Conference on Migration (RCM) held in November 2016. The event was organized by UNODC in partnership with the Ministry of Foreign Affairs in Mexico, the Government of Canada, RCM and the IOM, and funded by the United States Department of State through the Bureau of International Narcotics and Law Enforcement Affairs (INL).